In our last article, we looked at a quick support test of a pertinent level after the British Pound dropped on the heels of a Yougov poll around tomorrow’s election in the U.K. Tomorrow’s election, of course, was announced as an early general election by Prime Minister Theresa May in mid-April. At the time, the decision was widely-applauded as cogent political strategy as PM May could use the current backdrop in U.K. politics to secure a stronger majority for her Tory party which, could, give her contingent a stronger hand in Brexit negotiations with the EU. But last week’s poll indicated that Ms. May and the Tories may not have such a clean sweep in tomorrow’s election, and this prodded a quick dose of weakness into Sterling as anxiety drove a quick iteration of risk aversion.

Since then, we’ve seen Cable recover, albeit tenuously, as resistance has continued to show on the under-side of a previously bullish trend-line. 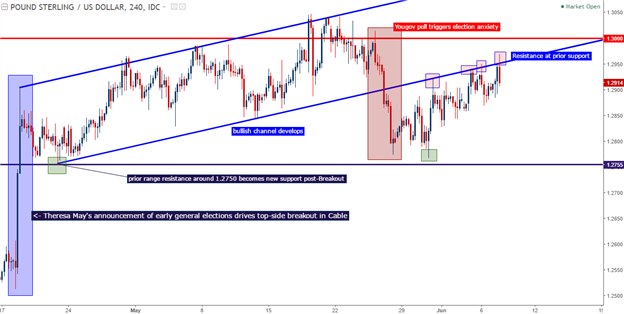 While it might be very attractive to ‘play between the cracks’ ahead of tomorrow’s election, the fact of the matter is that we have what could be a really big driver coming to light tomorrow. This can produce wild, chaotic and volatile price movements as markets attempt to price-in this new information as it becomes known. And bigger picture, we’re near the middle of a 300-pip range that’s built-in after the April breakout in the pair. This can be a noisy time for setting up positions ahead of major event risk when there’s been a lack of discernible trend on shorter time frames. 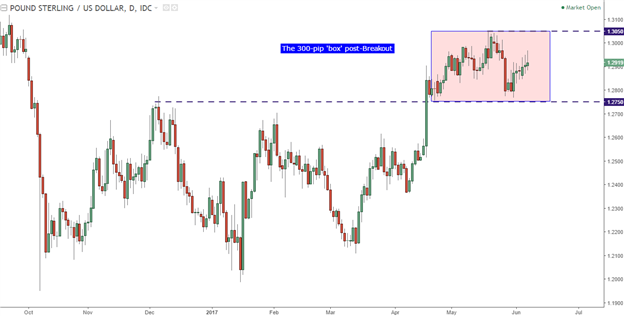 Moving forward, traders can use this ‘box’ to assist in setting up directional biases in the pair moving-forward. The widely-expected result is that a stronger Tory majority means more strength for the British Pound, and if this takes place we could see the 1.3050 level eventually yield to buying demand, at that point the door can be opened for bullish continuation strategies. If, on the other hand, the Tories put in a weaker showing, we could be looking at reversion to the prior range, sub-1.2750, and this can open the door to short-side continuation strategies.

While it may be appealing to use this 300-pip box as a breakout setup – please take caution. Whipsaw should during these types of events as market makers and banks will generally go more risk averse, which means less liquidity in major markets; and this can lead to even sharper moves than normal. This was very similar to what we saw during Brexit and again around the U.S. Presidential election. While tomorrow may not bring the same girth of volatility seen in either of those events, open orders and support and resistance levels become more vulnerable. 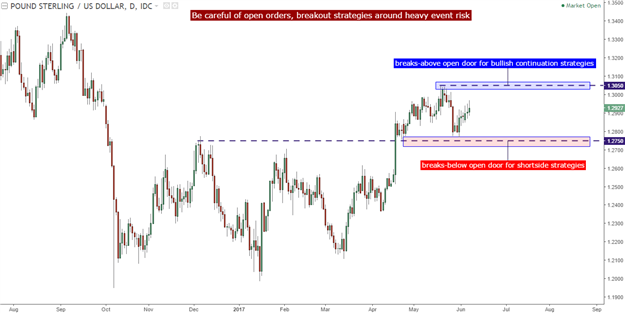