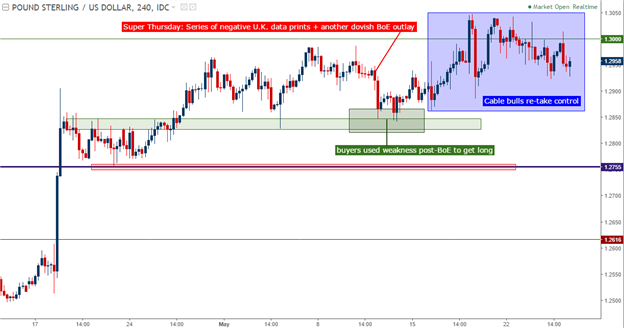 In our last article, we looked at GBP/USD as the 1.3000 psychological level loomed ominously above price action. After multiple attempts to take out the level fell just short of crossing 1.3000, each of which was met with a ‘higher low’ indication of support, it seemed as though finally crossing the vaulted psychological level was simply a matter of time. Well, it finally happened, but shortly after a series of negative drivers showed up for GBP; and with another one registering this morning with GDP growth coming-in below expectations, the hits just keep stacking up against the British Pound.

Two weeks ago, we saw a batch of poor numbers post for the U.K., as industrial production fell by .5% in the month of March from the month prior, and trade numbers came-in worse than expected as the U.K.’s trade deficit spiked-up to a six-month high. Later on that same day, the Bank of England hosted this quarter’s Super Thursday event; and at the accompanying press conference, BoE Governor Mark Carney took a familiarly dovish tone when he implied that the BoE is unmoved by the prospect of faster inflation, with the expectation that inflation can go as high as 3% by the end of the year. For a Central Bank sitting on an interest rate of .25%, that would be a -2.75% real rate; and yet the Bank of England continued to talk up the prospect of continued dovish accommodation.

The net result of the above collection of negative drivers was a mere higher-low along with a support test of a prior resistance point at 1.2825. Bulls returned shortly thereafter to continue driving prices-higher, with that eventual cross of the 1.3000 level taking place a week later. But since then, even more negative drivers have continued to print, and Cable bulls appear to be as unmoved by these negative pieces of data as the Bank of England is by the prospect of stronger inflation.

When negative news appears to be getting shrugged off or discounted by a market, while positive drivers (of which there have been few for GBP of recent) get accentuated and garner more attention; we’re witnessing a sentiment shift in the market as those dips or pullbacks produced by negative news or drivers are simply being used by bulls to add to or initiate long positions.

This can create a daunting backdrop for short-sellers in Cable, and those looking to fade this recent gust of strength in the pair would likely want to wait for support to break before entertaining such strategies. The zone around 1.2825 could be an initial support area to watch for such a trigger, but the longer-term level around 1.2750 would probably be far more proactive for an approach.

On the long side, the primary challenge is going to be one of risk management. With so many swing-lows above the prior areas of support at 1.2825 and 1.2750, price action has become rather sloppy and picking an area to place a stop for a long position can be challenging. For intermediate-term swing trades, that area around 1.2825 is likely going to be most attractive while longer-term horizons would probably want to look at nesting stops below the 1.2750 psychological level. Both approaches would require rather large stops of approximately 135 and 210 pips respectively; and factoring profit targets two or three hundred pips beyond the 1.3000 level of resistance could become a constraint. 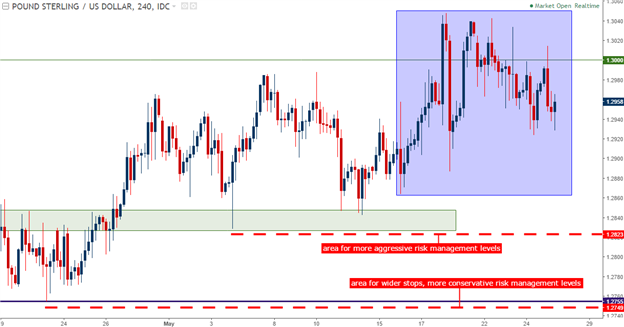 On the chart below, we’re looking at prior price action in Cable in the effort of finding top-side targets for longer-term outlooks should this bullish move in GBP/USD advance. The 1.3500 level is notable, as this area had helped to offer some short-term support during the chaos of price action after the referendum; and just above this psychological level is approximately 140 pips of still unfilled gap from the weekend after Brexit. 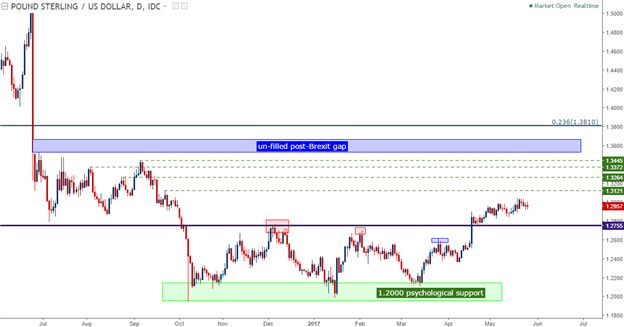