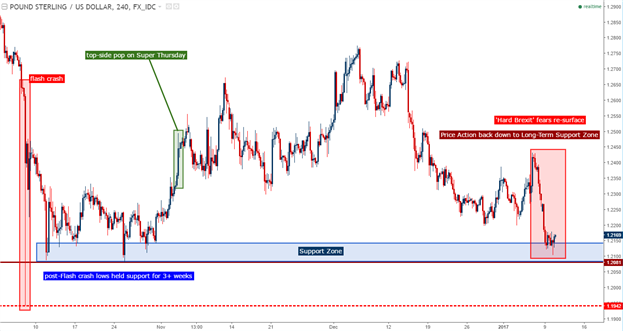 In our last article, we looked at the prior up-trend in GBP/USD coming into question as support was being tested by further lower-lows. As additional fears of ‘Hard Brexit’ have been permeating across markets, price action in Cable has fallen-lower, and we’re now testing a zone of support that had held the lows in Cable in the ‘post-Flash crash’ environment.

Despite testing this longer-term zone of support, near-term price action in the Cable is still bearish. On the hourly chart below, we can see another very recent ‘lower-low,’ indicating that selling in GBP/USD hasn’t yet abated. But, if short-term price action can begin moving in a more-bullish manner, traders may be able to plot a longer-term setup to respond to that ‘big picture’ zone of support that we looked at above. On the hourly chart below, we look at what could open the door to such a prospect. 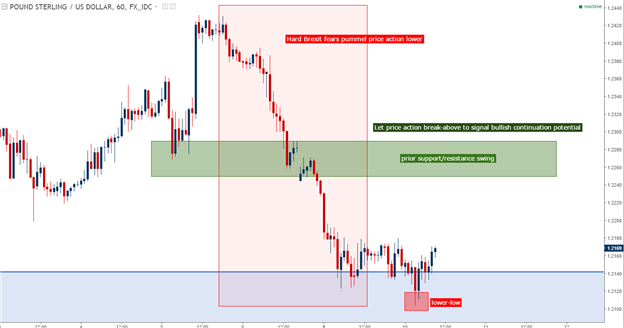 On the above chart, we’re looking at a zone from 1.2250-1.2288 that had functioned as a prior price action swing-low as well as a quick swing-high through this week’s opening-gap. Traders looking to implement bullish strategies would likely want to let this zone become broken to indicate bullish continuation potential before plotting top-side strategies.

On the short-side of the pair, traders will likely want to take heed of the fact that sellers have appeared to dry-up as we’ve tested the current zone of support; both in October and more recently. And the backdrop that we had in October was significantly different, as the BoE was still in an implied-dovish state ahead of November’s Super Thursday.