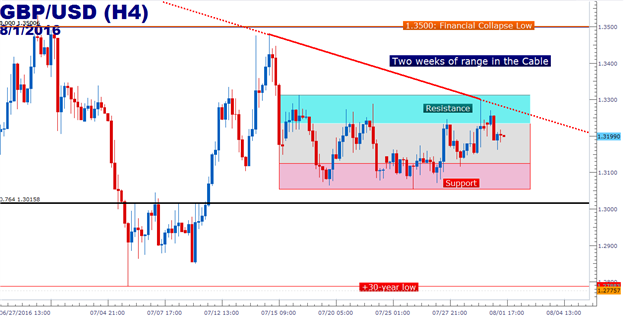 In our last article, we looked at the choppiness in the British Pound after the Bank of England kept rates flat at their most recent rate decision. And as we mentioned, markets would likely continue with the expectation for a rate cut at their next meeting in August. And with the BOE on the calendar for Thursday of this week, expectations for a rate cut are fairly aggressive at over 98%. Nonetheless, despite this marked bearishness on the Cable, the pair has remained in a relatively well-formed range over the last two weeks of July.

This raises the possibility that a 25-basis point rate cut from the BOE may already be factored into current price action; and given the fact that Thursday’s meeting also brings fresh Quarterly Inflation Forecasts for the U.K. economy, we’ll likely see more attention paid to the forward-looking projections from the bank rather than a single 25-basis point rate cut.

Traders looking to trade the range ahead of this Thursday’s Bank of England rate decision would likely want to exercise caution as we’re just a little over a month removed from the Brexit referendum that carries quite a few ‘unknowns.’ More proactively, traders could look to gauge the response at Thursday’s rate decision to plot near-term strategy in the Cable. Should a down-side break of support take place, then bearish strategies could become attractive again; but this would likely need to be accompanied with some fairly bearish inflation forecasts for the coming quarters as the British Pound is already sitting near 30+ year lows.

The top-side of the pair could become deceptively attractive should those inflation forecasts show only moderate downgrades for the coming quarters, as an extremely weak US Dollar could continue getting weaker as rate-hike bets out of the U.S. continue to get priced deeper-and-deeper into the future. But for such a strategy, traders would likely want to see resistance in this range around 1.3315 breeched before looking to buy a ‘higher-low.’