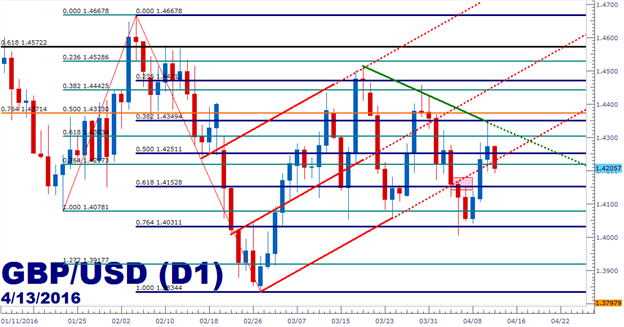 In our last article, we looked at a fresh short position off of the under-side of the prior bear flag formation. And after getting some down-side run long enough to hit the first target, prices have reversed and begun moving higher. Price action has now re-entered the bear-flag formation that we had looked at last time, and this amounts to a coagulated setup that doesn’t offer much for a directional bias at the moment.

There are currently cases that can be made for both long and short positions, and until that picture gets clearer we will stand aside.

For top-side setups, revisits to 1.4152 could prove interesting should price action show support in that vicinity. This is the 61.8% retracement of the most recent major move (shown in blue on the below chart). Should support develop here, that would be in the same neighborhood of the prior swing high, and this would be a chance to buy support in the area of old resistance.

For short setups, the primary point of obfuscation with the current price action would be stop distance, as yesterday’s swing high is approximately ~150 pips off of current levels. This would necessitate a 300-pip profit target to get towards a 2-1 risk-reward ratio, which could be difficult to forecast given price action structure throughout March. What could make this more interesting would be near-term resistance developing at 1.4251, which is the 50% Fibonacci retracement of the most recent major move. This would allow for a tighter stop to the previous swing-high, and that could make the profit target side of the setup considerably more realistic.