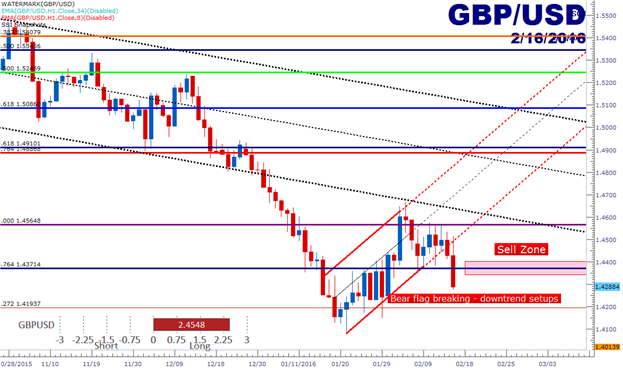 The British Pound is soundly lower across-the-board this morning after yet another hit to the rate hike hopes that Mark Carney had promised would come into ‘clearer focus’ at the end of last year. As matters would indicate from this point, that clearer focus was for further and further in the future. The most recent hit to those rate hike hopes was this morning’s inflation print that showed yet another miss. There is little motive for the Bank of England to be hiking rates here, and that is unlikely to change anytime soon.

The bigger question on the Cable is the US Dollar as the Fed wrestles with their own set of rate hike expectations. Coming into February, USD strength was a legitimate problem as mentioned by William Dudley two weeks ago. This was taken as a sign of dovishness from the Central Bank, and Chair Yellen’s testimony last week helped to kick US rate hike expectations even further out in the future with markets now giving higher a probability for a cut to US rates in 2016 versus a hike.

But as we’ve seen that weakness in USD since early February, this has provided some much-needed relief to the scalding down-trend that we’ve seen in the Cable to begin 2016. The pair spent three weeks trending higher in a bear-flag formation that began to break yesterday on the weekly open. This morning’s inflation miss provided the ammunition for lower-lows and lower-highs to denote the return of the down-trend. At this point, traders need to remain vigilant against chasing the move; The 1.4371 level is interesting for potential resistance as this is the 76.4% retracement of the ‘secondary move’ in the Cable, taking the Financial Collapse low to the 2014 high. This level had also provided price action with quite a bit of support, resistance, and then support again.

Traders can look for resistance to develop in this area, with the position trigger being a wick crossing through this level on the 4-hour chart. This would open the door for targets at 1.4250 (psychological level), and then 1.4100 (recent price action swing low). If 1.4100 gets pierced, this would be six-year lows, at which point traders would need to adopt breakout trade management protocol. This means faster break-even stops, and perhaps even more aggressive scaling out as new lows are made.