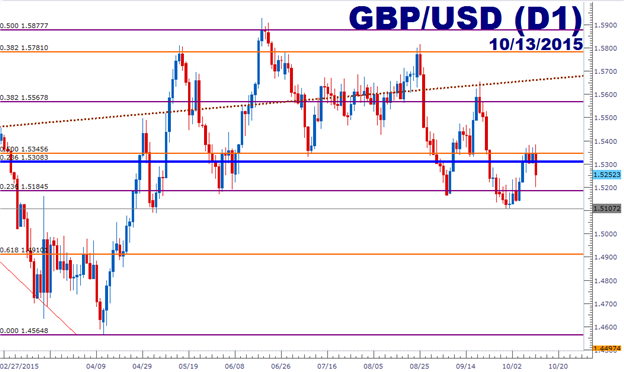 In our last article, we looked at a recently completed Morning Star formation in GBP/USD that could offer a long-side setup. Prices responded by moving higher by over 200 pips, but have run into another level-of-interest that’s capped the highs over the past four trading days. After British Inflation disappointed earlier in the day, we’ve seen massive Sterling weakness as rate-hike bets for the UK get pushed further into the future.

The current level of resistance is 1.5345, which is the 50% Fibonacci retracement of the ‘secondary move’ in GBP/USD (taking the Financial Collapse low to the 2014 high). This level has capped price action over the past four trading days, and the disappointing news this morning has helped the pair to move down to a previous support level. Should price action return to this zone of resistance starting at 1.5308 (the 23.6% retracement of the ‘big picture move,’ taking into account the 2007 high to the 2009 low) up to 1.5345, traders can look for intra-day resistance to form before enacting short-positions. Should this short-side setup become available, targets could be cast towards 1.5184 (23.6% of the most recent major move, taking the 2014 high to the 2015 low), 1.5107 (the low from last week’s morning star formation), and then 1.5000 (major psychological level).

The more interesting long-term moves on the Sterling will likely be decided by the continued debate around rate hikes. All that we know for now is that the global economy is slowing, and this slowdown is now being seen in the UK as well as the United States. The bank that blinks first on rate hikes will likely see the weaker currency, and given the Fed’s continued insistence towards a 2015 rate hike, the near-term bias may be on the down-side in GBP/USD.