GBP/JPY Bounces From Fibonacci Support: Is the Pain Trade Complete?

- GBP/JPY has spent much of the past three weeks selling-off, and this has happened as the backdrop around the British Pound has grown considerably less-optimistic. While we came into April expecting a rate hike at the BoE’s ‘Super Thursday’ this week, that move no longer looks as certain, and this keeps the British currency in the spotlight as we move towards another rate decision.

- GBP/JPY tested around the 147.03 to close last week, and prices are now bouncing. But the bearish move may not yet be over, and while prices remain relegated below 150.00, the door remains open for short-side strategies.

Sellers Come Back to GBP/JPY

GBP/JPY had a brutal month of February. While the pair was clinging on to a prior bullish trend from 2017 when we opened up the month, a stark reversal enveloped price action and drove the pair lower, with support finally showing around the 145.00 psychological level in the first few days of March. As strength came back, prices climbed back above 150.00 and, eventually, to the 76.4% Fibonacci retracement of that February sell-off. But, after three days of grind around this level in mid-April, sellers were back, and in short-order price action had made a descent back down towards 147.00. 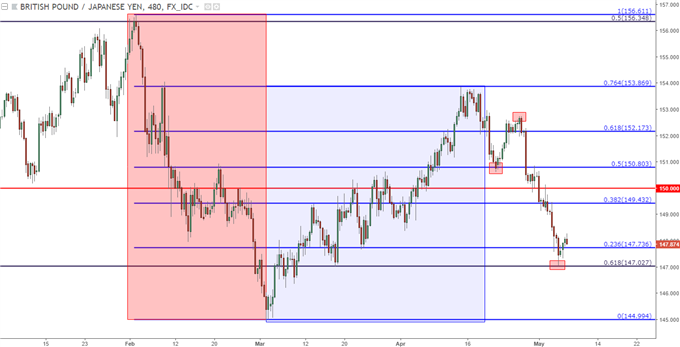 Since mid-April, there’s been quite a bit of change around the British Pound. While we came into last month very much looking for a rate hike at this week’s ‘Super Thursday’ rate decision, a disappointing inflation print last month, followed by some dovish commentary and then a disappointing GDP print have helped to offset those odds. GBP-weakness came rushing back-in as markets priced-out the possibility of a near-term rate hike, instead looking to later in the year for any potential tightening that may take place.

This helped to drive GBP/JPY back to a familiar level around 147.03. This is the 61.8% Fibonacci retracement of the 2012-2015 major move, and this level helped to mark a double bottom formation in Q4 of last year before prices ran to fresh post-Brexit highs.

GBP/JPY Daily Chart: Back to Support Around 147.03 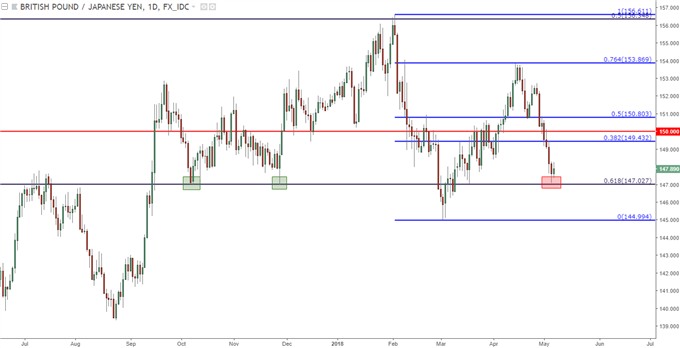 While the three-week trend here has been rather one-sided, prices have run into a previously significant area of support while near-term indications suggest we have an oversold market. This can open the door to a retracement of that recent bearish move, at which point short-side strategies become attractive again. On the hourly chart below, we’re looking at two potential areas of lower-high resistance underneath the psychological level of 150.00. The first of these areas is taken from a quick swing-low/high from last week around 148.37; and the second is an approximate 30 pip zone from 149.14 up to 149.43, which is the 38.2% retracement of the February sell-off. Resistance showing at either of these areas would open the door for short-side continuation strategies; and if prices do sustain a topside break above the 150.00 psychological level, the bearish stance would likely need to be abandoned. 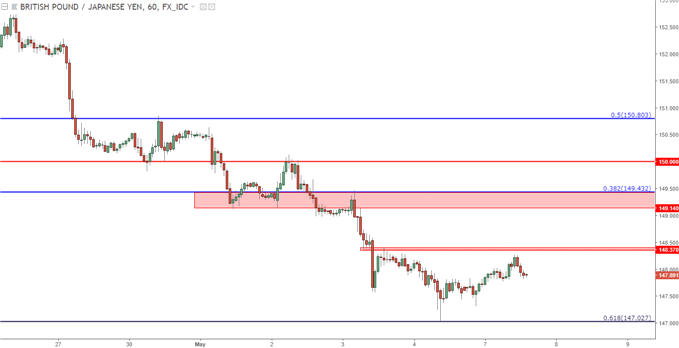