- GBP/JPY has started to show volatility again after an uncharacteristically quiet 2017 continued into the early portion of this year. After an aggressive reversal showed in February brought on recovery in March, the pair has remained on the move so far in April.

- GBP/JPY put in an aggressive reversal around last week’s UK inflation numbers, and this has sent prices back below the post-Brexit trend-line. Support came-in around the ‘s3’ level that we looked at last week, and now we have a shorter-term trend-line helping to hold the lows. We look at both trend-lines below.

Last week saw a vicious reversal show-up in GBP/JPY after the one-two combo of UK inflation and more dovish commentary from BoE Governor, Mark Carney. As we came into last week, GBP/JPY was riding high on a bullish trend that saw prices re-engage above the post-Brexit trend-line. This is a trend-line taken from the October, 2016 ‘flash crash’ low up to the August 2017 low. This trend-line projection offered multiple support hits in February, but soon became resistance in March when prices scaled-below.

Even when the pair recovered from the February sell-off, price action rubbed along the under-side of this trend-line for two weeks before a bullish breakout in April saw prices move back-above. But even that has been short-lived, as last week’s bearish reversal has sent prices right back-below that post-Brexit trend-line. 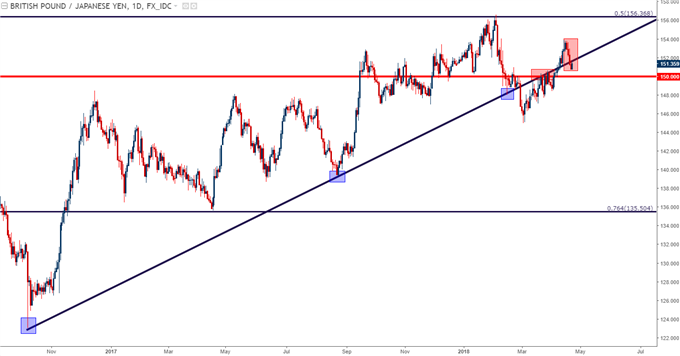 After last week’s read of UK inflation for the month of March, prices posed a quick reversal of that prior bullish theme. Shortly after the release of inflation numbers, we published an article on GBP/JPY entitled, GBP/JPY: Support at Prior Fibonacci Resistance, But Will it Hold? The answer to that question was a definitive ‘no,’ and we’ve since seen prices scale-down to the next level of relevance at the 50% retracement of that same move. This level is at 150.80, and this is a confluent level as we also have a shorter-term trend-line in this area, taken from the March-April lows. 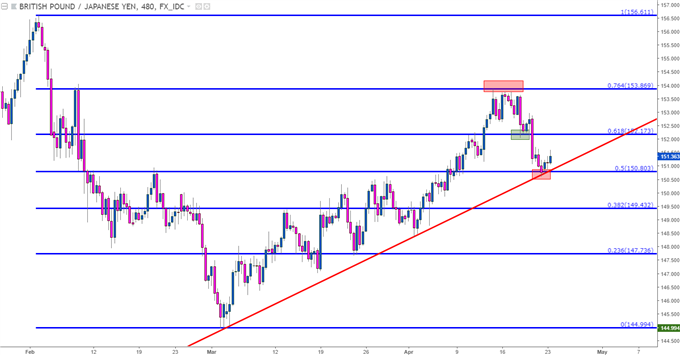 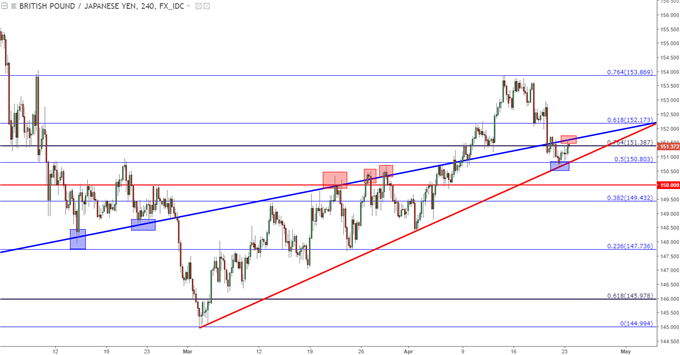 On a shorter-term basis, the more interesting item would appear to be bullish in nature; looking to trade a reversal of last week’s bearish drive in the pair as we near a Bank of Japan rate decision later in the week. The area of support around 150.80 was the ‘s3’ level from our article last Wednesday, and the same themes that we discussed there remain as attractive.

From the hourly chart below, we can see where prices have re-engaged above another Fibonacci level, this one at 151.39, serving as the 76.4% retracement of the Brexit-move in the pair, and this keeps the door open for a continuation of short-term higher-highs and higher-lows, anticipating a top-side break back-above the post-Brexit trend-line.

GBP/JPY Hourly Chart: Attempting to Carve Out a Bottom 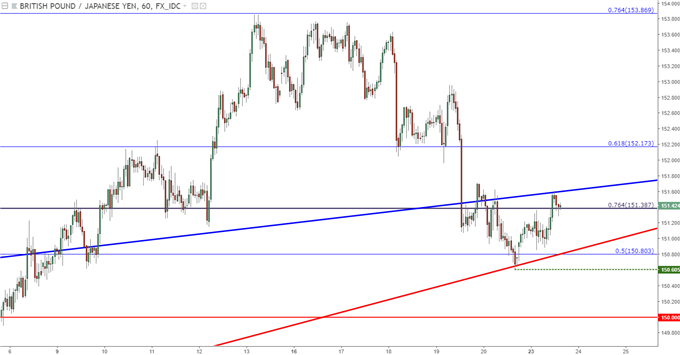