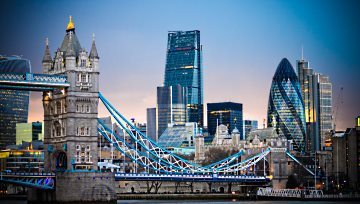 GBP/JPY Bears Show at Resistance: Is the Bullish Bounce Done?

- GBP/JPY is seeing some two-way volatility this morning, first breaking below short-term supports before finding a bounce off of the 23.6% Fibonacci retracement of the February sell-off in the pair.

- This comes after a visit towards a confluent area of resistance, taken from the 38.2% retracement of that same Fibonacci study along with the under-side of the post-Brexit trend-line, which was breached in a big way in February.

GBP/JPY Flips the Switch in February

As we came into February, GBP/JPY remained in a steady up-trend that had been in-force ever since the lows of the GBP Flash Crash of 2016. Prices in the pair perched-up to a fresh 18-month high on just the second trading day of the month, at which point a tonality change began to show. The big driver here appears to be Yen-strength, as this is something noticeable in other pairs such as EUR/JPY and even USD/JPY, which is in the process of testing a big zone of longer-term support.

The driver appears to be emanating from rising rates of inflation in Japan, bringing with it the potential for a Euro-like scenario in the Japanese currency this year. That Euro scenario showed prominently in 2017, as stronger rates of growth and inflation led investors to buying the single currency in anticipation of an eventual move away from QE. To date, we still have no confirmed information of an actual move away from QE by the European Central Bank; we merely have signals that this may be in the offing. But, that has mattered little across the FX market as Euro-strength remains a prominent theme, and this is something that can keep interest brewing behind the Japanese Yen as inflation continues to show with strength in the island nation.

In GBP/JPY, that tonality change came in a rather undeniable fashion, as prices dropped by more than 1,000 pips in a month, breaking-below a key trend-line before finally finding some element of support off of the 145.00 psychological level.

GBP/JPY Undergoes a Forceful Turn in Tonality in February 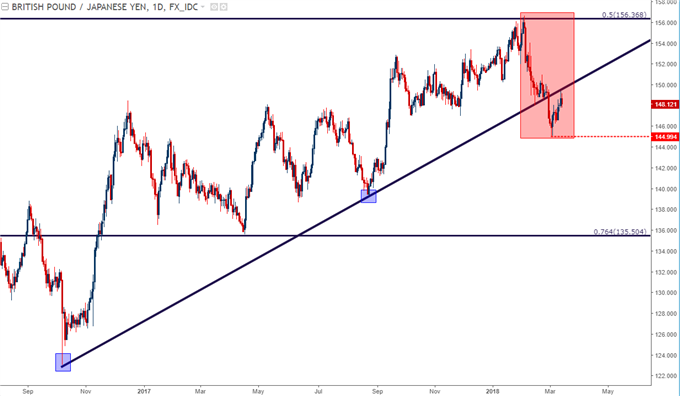 That support hit at 145.00 helped to cauterize the lows after that aggressive sell-off engulfed the pair’s price action throughout February. As we came into March, that support helped to push prices higher, and in our last article, we looked at two areas of interest for lower-high resistance; both of which were based off of a Fibonacci retracement around the February sell-off.

The second of those areas was a price with a bit of confluence, as the 38.2% retracement of that February sell-off was very near the projection of the post-Brexit trend-line. This is very near yesterday’s high, which came just three pips from interaction; and since then we’ve seen a bearish move drive the pair back down to the 23.6% retracement of that same move. 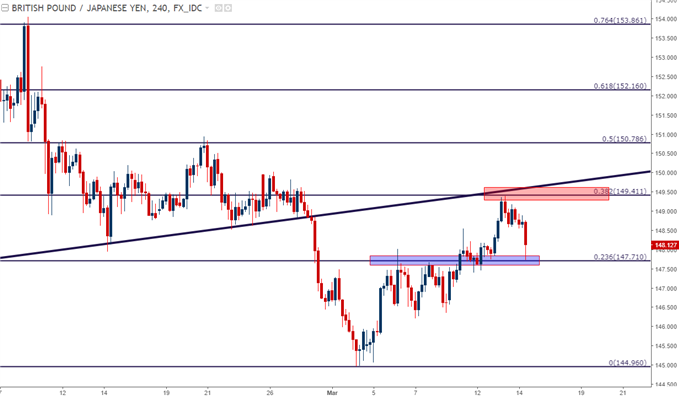 We’ve seen a bit of support show-up at that 23.6% retracement, but this doesn’t necessarily nullify the short-side of the pair for bearish approaches. Traders can look for a short-term element of lower-high resistance around 148.55 to look for bearish exposure. This can allow for a stop above that confluent zone of resistance investigated above, with a retest of 145.00 bringing with it a potential one-to-3.5 risk-reward ratio. Traders can look at scaling profit targets along prior areas of support, such as 147.00 or 146.50 before looking for that re-test of 145.00.

A break below 145.00 could open the door to significantly more downside, particularly if this theme of Yen-strength continues to develop. On the bullish side of the pair, traders would likely want to see price action re-eclipse 150.00 before plotting long positions.

For those that want to approach the pair with a bit more caution, awaiting a down-side break of the 23.6% Fibonacci level at 147.71 could open the more to additional down-side, with targets cast to the deeper supports mentioned above, such as 146.50 before that re-test of 145.00. 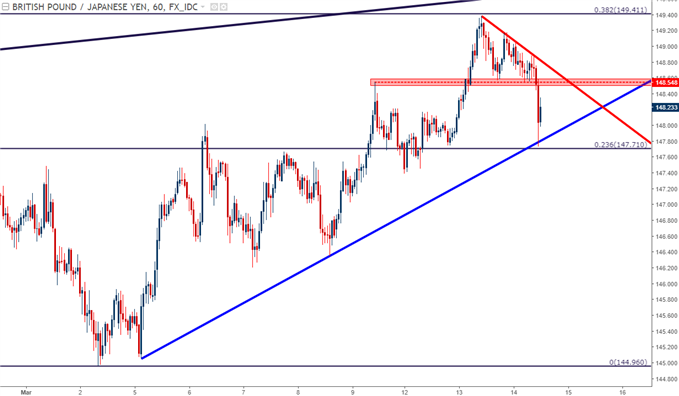