GBP/JPY Pulls Back from Fibonacci Resistance Ahead of BoE

The British Pound spent most of last year displaying a surprising element of strength, especially to those harboring negative outlooks based around Brexit. This strength was quite evident against a very weak US Dollar, but it showed up as well against the Japanese Yen. GBP/JPY sank below 137.00 in the first couple of weeks of last year’s trading, but by the end of the year had set a fresh post-Brexit high at above 153.00. The open of this year saw that move deepen, and prices continued to run until setting a fresh high just last week above 156.00. But since that high came in, bulls have started to get shy; as this high printed right at a key Fibonacci level in the pair, as 156.38 is the 50% retracement of the ‘Abenomics’ move in GBP/JPY, taking the 2012 low up to the 2015 high.

Of particular note is how the 61.8% retracement of this same move had helped to set a double-bottom area of support in Q4 of last year. 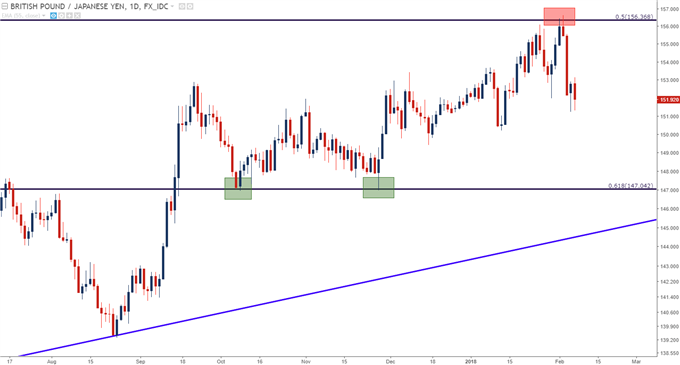 Since that Fibonacci resistance has come into play, bids have been few and far between in GBP/JPY. Prices made a quick move-lower to a prior area of support around 152.00, but even that was unable to hold as risk aversion was driving flows in the early-portion of this week. After a bounce around 151.20, prices came back up to find resistance at 153.00, giving us a sequence of lower-lows and lower-highs to work with. Problematic, however, is proximity to longer-term support ahead of a really heavy piece of event risk tomorrow with the Bank of England’s Super Thursday on the docket. Current prices appear to be trying to find support around a trend-line projection that can be found by connecting the December swing-low to a batch of support that had showed up in January. 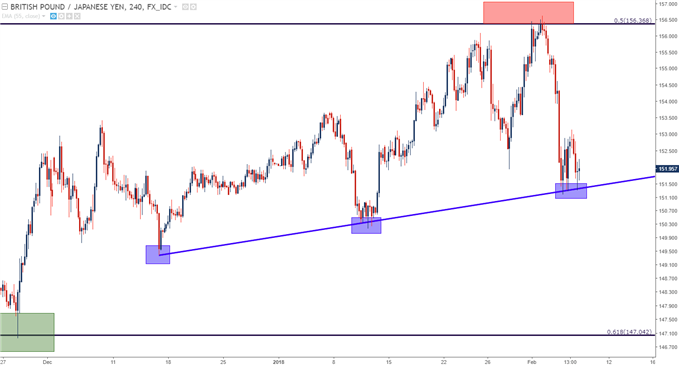 While that trend-line had helped to hold support earlier in the week, sellers were undeterred as resistance showed shortly after the bounce began. Prices took another bearish turn around the 153.00 level, further complicating short-term bullish plays and making the concept of buying a reversal ahead of tomorrow’s Super Thursday event a rather unattractive prospect. 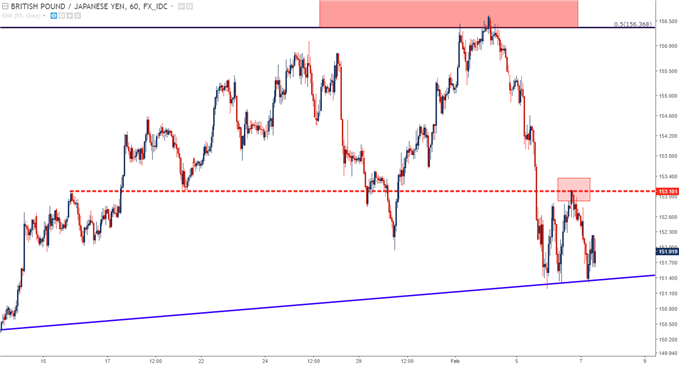 For longer-term strategies: Traders can go into tomorrow’s rate decision looking to trade a reaction. If prices do break below that bullish trend-line above, there are a couple of support levels underneath current price action that could be interesting for bullish continuation prospects. The January swing-low came-in just a big above the 150.00 psychological level while the December swing-low was just a bit below. Collectively, these two lows can comprise a zone of support that can be usable for longer-term topside strategies. A revisit to this support, met with actual support as indicated by underside wicks in or around this zone on the four-hour chart, can open the door for bullish exposure in the pair. 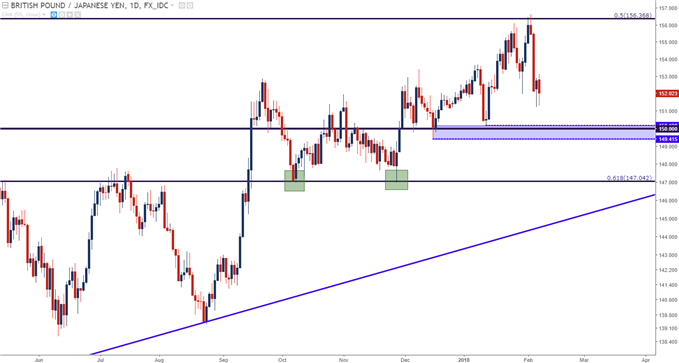