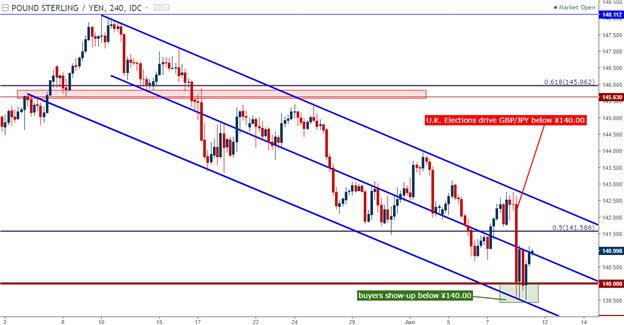 In our last article, we looked at the continued fall in GBP/JPY as the pair ran into a very pertinent support level around ¥141.50. But as we said, given the bearish momentum that had been showing, resistance could be sought around ¥143.50 in the effort of trading downside continuation. And after a swing-high showed just below ¥144.00, bears re-gained control and drove price action lower leading into yesterday’s election; and as election results in the U.K. triggered a fresh round of confusion and uncertainty around Brexit, sellers remained in the driver’s seat until the vaulted psychological level of ¥140.00 was tested:

As election results began filtering-in around the U.S. market close, a large amount of gyration began to take place in GBP/JPY right around this level of ¥140.00. Buyers continued to show support at the 139.50 level, and eventually, regained control of short-term price action as prices moved back-up to prior swing resistance around 141.00. On the chart below, we get more in-depth with that short-term gyration between ¥139.50-140.00 as U.K. election results were filtering-in to markets. 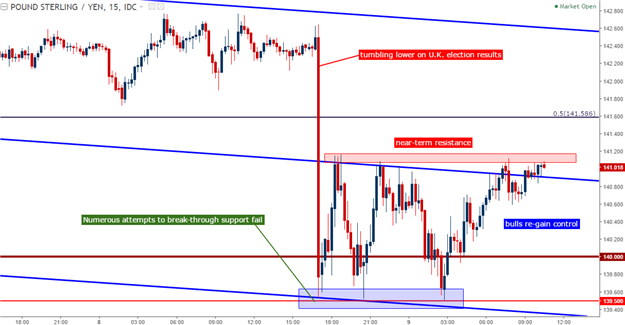 Longer-term, we have a bearish channel that’s seeing a short-term push-higher. That previous level of 141.50 can be re-incorporated to assist with near-term directional stances. For those that are looking to take on bearish exposure, this can be a novel area to watch for resistance to develop in the effort of trading bearish continuation under the presumption that the bearish channel that we’ve seen in the pair may continue.

For those looking to press a bullish stance, caution is likely the order of the day, at least until 141.50 can be re-eclipsed, at which point short-term bullish momentum strategies could be considered, with target set towards previous resistance values around ¥142.50. This type of strategy would likely need to be accompanied with rather tight risk management until the bearish channel is broken, and the prospect of higher-highs on longer-term charts becomes more likely. 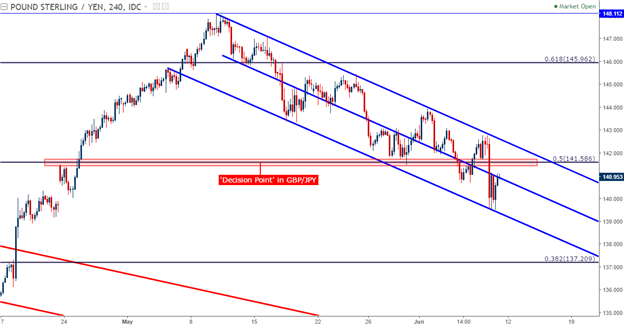