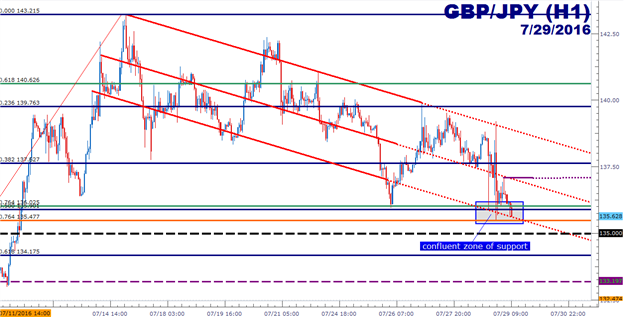 In our last article, we looked at GBP/JPY attempting to claw-together an up-trend after two weeks of higher prices. And as the Yen was continuing to weaken on the expectation of additional monetary stimulus out of the Bank of Japan, the potential for a reversal of the Brexit-driven down-trend was alive and well. But at the time, price action was continuing to find resistance at a key Fibonacci level, and as we advised traders would likely want to wait for further confirmation of the up-trend before looking to trade the pair long.

Last night’s Bank of Japan meeting did not bring the monetary bazooka that many were hoping for: There were no announcements of helicopter money, and the bank merely increased their purchases of ETF’s. And while this is a form of stimulus for the Japanese economy, it fell far short of the expectations of the ‘big program’ that many market participants were hoping for. As this disappointment around BoJ permeated into markets, the Yen strengthened as stimulus bets priced-out of Yen-pairings.

The big question now is whether the Bank of Japan is going to trigger this ‘larger’ stimulus program that markets have been looking for at their September meeting. Given that resistance has shown on the Yen in many pairings shortly after last night’s decision (and given that the Yen is the counter-currency in most pairings, this would mean support in that individual market), it would appear that some market participants may be trying to use this move of strength to position-in to Yen pairings in anticipation of weakness ahead of September.

Moving forward, traders looking to trigger short positions in GBP/JPY would likely want to see this zone with numerous support levels become breeched before looking to trigger positions. On the long side, should near-term price action take out the prior ‘lower-high’ on the hourly chart at 137.08, traders can look for top-side reversal plays under the premise that this confluent zone of support may have stemmed the declines, and that further anticipation of eventual monetary stimulus continues to drive flows of Yen-weakness.