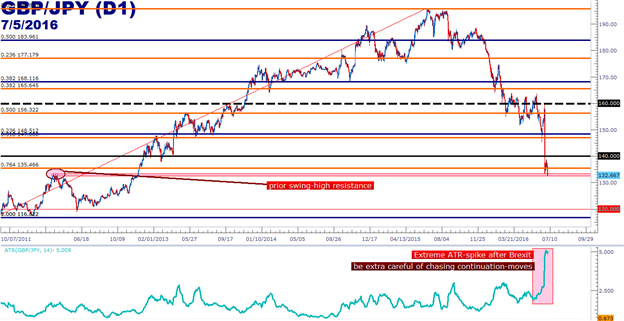 GBP/JPY Technical Analysis: Over 76.4% of Abe-nomics Wiped Out in GBP

In our last article, we looked at the eye of the storm in Macro-economic headlines in GBP/JPY. With both currencies seeing intense speculation around the prospect of continued risk aversion and fears of a global slowdown, GBP/JPY has been putting in some especially volatile moves since the Brexit referendum two weeks ago.

In the Sterling, we have a continuation of the dramatic drop initially seen around Brexit, as the Bank of England has struck a dovish tone in an apparent attempt to proactively counter slowdown in the U.K. economy expected as a result of Brexit. And in the Japanese Yen we have continued strength being driven by risk aversion, with the USD/JPY driving closer to the psychological level near 100.00. This is notable because further breaches lower in USD/JPY, particularly below these big psychological values, may elicit comments from the Bank of Japan or the Japanese Finance Ministry towards intervention in the spot market, much as we saw in the day after the Brexit referendum. And as JPY surges to fresh highs against major currencies, such as the US Dollar or the British Pound, traders need to be on guard of getting caught on the wrong side of a market as a Central Bank prods the other side.

The ‘Brexit low’ in GBP/JPY at 133.19 had held in the pair until this morning as the Bank of England delivered a dovish Financial Stability report, indicating that a rate cut may not be too-far-off in the future. This echoed the sentiment of Mr. Carney’s impromptu press conference last week in which he said that the bank may be looking at a rate cut at some point this summer to offset the expected slowdown in the economy as a result of Brexit. This sent GBP price action lower, and GBP/JPY breached through levels not seen since 2012.

In March/April of 2012, price action in GBP/JPY had set a swing-high in the zone from 132.50-133.50, just before setting a higher-low ahead of the ‘Abe-nomics’ rally that lasted for nearly three years. But much of that rally has come undone already, with price action on GBP/JPY breaking through the 76.4% Fibonacci retracement of that move at 135.47. That level had appeared to offer a semblance of support in the latter portion of last week, and this can be appropriated by traders looking to get short GBP/JPY in the aim of trading a continuation of the move lower.

While this level may appear far away from current price action, given recent volatility in GBP-pairs with Daily ATR at over 500 pips as of this writing, that type of retracement could come-in over a single day’s worth of moves. This elevated ATR also behooves patience for those looking to trade this on either side of the move, as getting caught in the wrong direction could be especially costly with the prospect of the down-trend being offset by threats/fears/concerns around the Bank of Japan intervening in the spot market to quell Yen-strength.

Should resistance form in this prior zone of support between the major psychological level of 135 to the 76.4% Fibonacci retracement at 135.46, traders can look at the prospect of down-side continuation strategies.