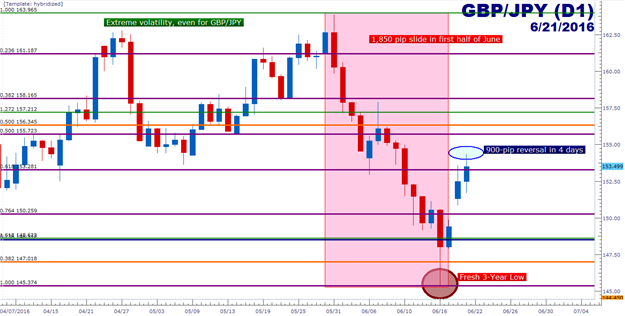 In our last article, we looked at the extreme volatility that had begun to show in GBP/JPY. And given that this is GBP/JPY, which is often called ‘the dragon,’ or the ‘widowmaker’ for its traditionally volatile movements, the fact that we’re seeing even greater uncertainty than normal is really saying something. But this pair is very much in the crosshairs of two different yet pensive global risk factors: GBP is being swung around as we approach the widely-awaited Brexit vote, while JPY has been seeing elevated volatility on generalized movements of risk aversion.

As we go into the referendum on Thursday, traders need to be extremely cautious around any GBP-pairings. The results of the referendum are expected to be announced on Friday morning, and even in the wake of the actual announcement, we may see heavier than normal volatility. The expectation is that many banks and institutions will tighten up risk around GBP-pairs, and this could amount for an even more dangerous scenario.

Case in point, shortly after setting a new three-year low on Thursday of last week, GBP/JPY put in a vigorous 900-pip reversal. But this outsized rally only brought price action into a prior zone of support which also happens to be in the neighborhood of the 38.2% Fibonacci retracement of the most recent major move, taking the swing-high at 166.07 to the low set last week.

The aggressiveness of this move should serve as a warning of caution to traders. While a rally into a lower-high may normally be looked at as a short-side resumption setup, the fact that the reversal has moved by more than 900 pips in a mere four trading days could be enough to invalidate the setup on the grounds rampant volatility.

Perhaps more important will be the follow-thru of price action this week after the results of the referendum are communicated to markets. At that point, traders may be able to look for setups that could potentially have some continuation potential without the nuisance of a potential ‘game changing’ piece of news in the foreseeable future.