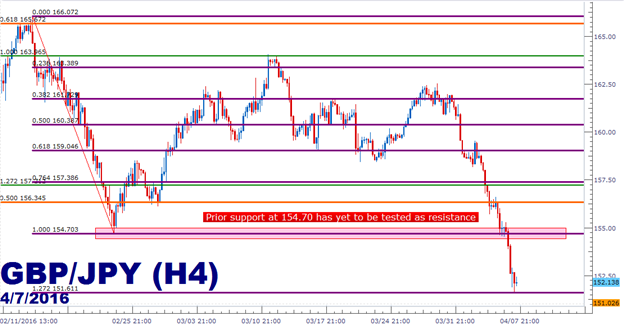 The Yen continues to remain strongly bid on the back of safe-haven like drives, and when married up with what’s been an exuberantly weak British Pound being driven by fears of the unknown ramifications of a Brexit, we have the perfect recipe for volatility. But its situations like this in which it’s important to define the core of volatility; as ‘volatility’ doesn’t simply mean ‘big moves.’ It really means more uncertainty; a wider range of possible outcomes. And sure, this could amount to bigger winners and bigger losers, but it also mean directional observations may be less valuable than they would in a lower-volatility environment.

The reason for pointing this out is that GBP/JPY, on that back of those macro themes mentioned above, has driven lower by over 1,000 pips in a little more than one week. This is an outsized move, even for the pair that is often called the ‘widow maker.’ And this doesn’t necessarily preclude additional entries, but at the very least it should exude caution.

This morning’s run brought in support at a new lower-low of 151.61, which is the 27.2% extension of the previous major move (shown in purple on the below chart). This level of support hasn’t been confirmed long enough to entertain reversal plays, but this could certainly provide basis for an upcoming short entry. Specifically, the previous support level that was tested again yesterday at 154.70 could become a level of interest for short-side re-entry. This level had provided the February low in the pair, and had again provided support to price action yesterday.

If price action can find resistance at this level, that could provide for an interesting trend-side setup in which traders can re-incorporate this new 151.61 support for profit targets. Also relevant on that front would be the major psychological level of 152.50 as well as the next major psych level lower of 150. If those should break, there’s an interesting zone in the 148.50-148.62 neighborhood. 148.50 is the 23.6% retracement of the ‘big picture’ major move (2007 high to the 2011 low) in the pair, and 148.62 is the 61.8% extension of the prior move (again, in purple on the below chart).

For entry, traders can look to price action to govern the triggering of the position, waiting for a wick on the hourly or 4-hour chart at this 154.70 zone before looking to get short.