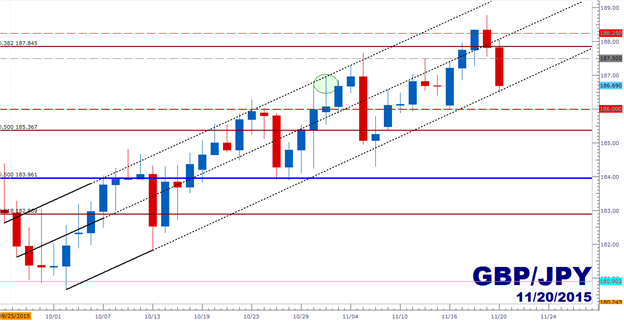 In our last article, we looked at setups on both sides of GBP/JPY as a recent bear-flag break had run into a major support level on the pair. And as we had mentioned, there appeared to be a few different trends at work at the time; where the near-term trend looked strong and bullish, while the longer-term moved looked more bearish than anything. Driving on each side of this market are Central Banks that have provided considerable uncertainty as far as future rate hike moves, or additions/extensions to their QE programs.

But after gapping lower against the Yen to start the week, Sterling caught a major bid and saw aggressively strong price action against most major currencies. This brought prices over key resistance levels at 187.50, 187.84, 188, and then eventually the previous swing-high at 188.25.

But after the Bank of Japan went yet another meeting without announcing an extension or increase to their QE program, prices moved lower as this hope for additional ‘Yen-tervention’ was faded out of most markets. This brought prices in GBP/JPY right back to a trend-line support level that can be found by connecting the October 2nd low to the October 13th low, the projection of which has caught multiple points of support (confirmation) after-the-fact.

Traders can look to lodge stops below the previous swing-low, which was also the weekly open at the 186-region. This way, should the up-ward sloping trend-channel break to the down-side, the position could be abandoned before any ‘bigger picture’ moves develop against the trader. With a ~70 pip stop, the trader can then cast targets towards those previous resistance values that had given way earlier in the week, starting with the psychological level at 187.50, followed by 187.84, which is the 38.2% Fibonacci retracement of the most recent major move in the pair (taking the 2015 high to the 2015 low), and then 188.25. The Thursday high at 188.79 could function as an additional top-side profit target should prices really move to the up-side, followed by the projection of the upper trend-line of this channel formation, which for next week comes in at approximately 189.50.