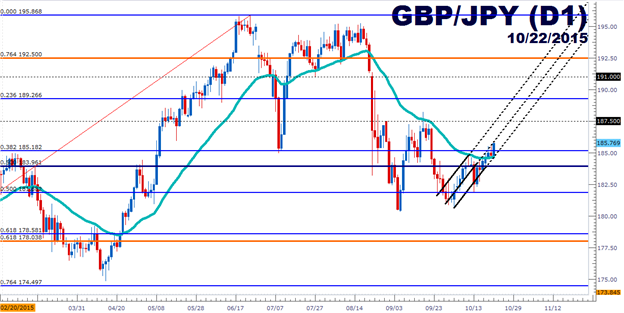 In our last article, we looked at a confluent zone of Fibonacci resistance that was offering a near-term topping formation in GBP/JPY. And within 24 hours, both profit targets were cleared as a disappointing inflation report out of the UK sent prices spiraling lower as rate hike expectations were quickly diminished as the British economy became the most recent to go into ‘deflation.’ The two provided targets were at 182.50 (a major psychological level as well as a recent price action swing-low), and then 181.88 (the 50% Fibonacci retracement of the most recent major move in the pair, taking the October 2014 low to the 2015 high).

But shortly after that move lower, we got conflicting data out of the UK that showed brisk improvement in employment; key of which was wage growth (the pre-cursor to inflation) that, when combined with the deflationary print from the day before, amounted to the fastest real wage growth in the UK since the Financial Collapse. So while rate expectations were quickly dashed on the deflationary print, prices quickly reversed as those expectations heated back up only a day later. And since then, the Sterling hasn’t slowed down as its continued trending higher against most major currencies, the Yen included as many are beginning to expect an increase in stimulus from the Bank of Japan at their next meeting on October 30th.

The near-term setup on GBP/JPY is bullish, albeit barely, as we’ve just broken above a confluent zone of resistance in the 185 region. We're trading within a bullish channel that's been active since the beginning of October, and when paired up with the prior down-trend, we have a bear-flag to work with.185 is a major psychological level, and 18 pips higher we have the 38.2% Fibonacci retracement of the most recent major move, and at 185.85 we have a projected mid-line of a trend channel that’s been building in GBP/JPY for the past month. Perhaps more importantly, this price zone had offered two days of resistance before this morning’s ECB announcement sent risk trends higher, and this can present a prime candidate for a ‘fade’ in the coming days. Should price action stage a turn-around before breaking above the next major psychological level at 187.50, traders could look to trigger short positions with targets cast towards previous support levels. From current price action, that would be at 185.50 (Tuesday and Wednesday high of this week), 185.18 (the 38.2% Fibonacci retracement of the most recent major move), 185 (major psychological level), and then 184 (confluent Fibonacci level as 50% of the ‘big picture move’ taking the 2007 high to the 2011 low).

Alternatively, should this up-trend continue past 187.50, that would be an invalidation of the bearish trend and in-turn, this bear flag. At that point, traders can more confidently look for a return of the longer-term up-trend in GBP/JPY. This could open the door for targets at 189.26 (23.6% retracement of the most recent major move), 190 (major psychological level), 191 (prior price action swing low), and then 192.50 (major psychological level as well as the 76.4% retracement of the ‘secondary move’ in GBP/JPY, taking the 2008 high to the 2011 low).