Major Indices have enjoyed a two-fold tailwind from warming US-China trade ties and dovish central bank policy which has allowed them to post gains in September thus far. As it stands, the fundamental landscape lies largely with Wednesday’s FOMC meeting at which the Federal Reserve is expected to cut the Federal Funds rate by 25 basis points. With the FTSE 100 and CAC 40 trading slightly beneath resistance, will they require a fundamental catalyst to break above or drive higher in the coming days regardless?

Either way, the FTSE 100 has a perilous path ahead. Continued Brexit uncertainty will likely divert some attention away from monetary policy matters and could keep the Index beneath resistance at 7,367 until loose-ends are tied. The Index could encounter subsequent resistance at the ascending trendline around 7,475 and 7,570.

Support may exist at the nearby 200-day moving average, which conveniently lies at the at the 7,300 level. Secondary support could enter the fray at the nearby Fibonacci level around 7,200. While the fundamental backdrop faces uncertainty and technical resistance looms, IG Client Sentiment data reveals that traders remain net-short the FTSE 100 which could suggest the Index will continue higher despite the headwinds.

Unlike the FTSE, the CAC 40 enjoys a relatively stable domestic backdrop. To that end, the French equity Index has enjoyed a steeper climb than its British counterpart and rests slightly beneath recent highs at 5,672. The level will look to resist a continuation higher. If surpassed, the CAC 40 could target levels not seen since 2007 when the Index traded above 6,000.

Thus, subsequent resistance in the event of a bullish break higher could look to materialize around the 5,872 level – the 76.4% Fibonacci retracement from the Index’s high in 2001 to its low in 2003. The level exhibited its ability to influence price in 2007 when it acted as resistance and could look to prove its merit once more. Like the FTSE, retail traders remain overwhelmingly short the CAC 40 – despite its recent track record. 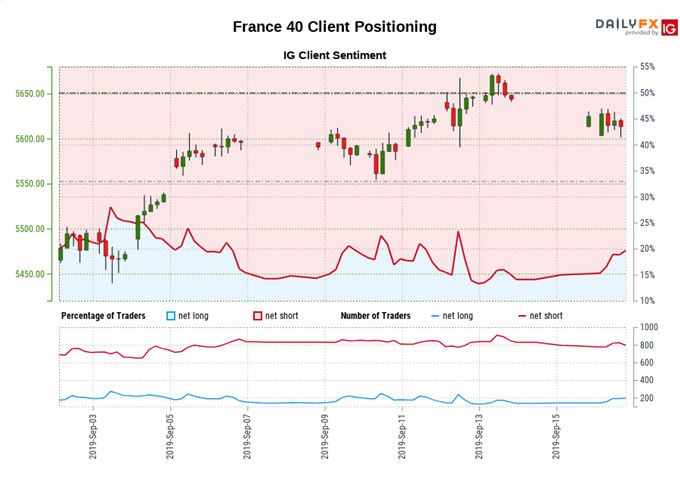 We typically take a contrarian view to crowd sentiment, and the fact traders are net-short suggests the CAC 40 may continue to rise. Yet traders are less net-short than yesterday and compared with last week which could begin to erode the bullish-contrarian signal. For a deeper look at positioning and how to incorporate it in your trading strategy, follow @PeterHanksFX on Twitter or sign up for the Weekly IGCS Webinar Walkthrough.