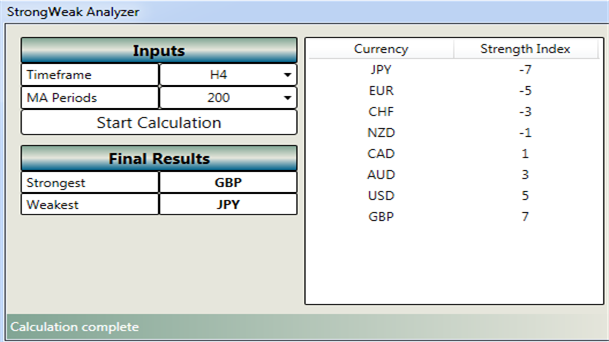 In the Post-Election G10FX World, the Japanese JPY is the weakest currency as measured by a 200-MA on a four-hour chart. Meanwhile, the US Dollar has become a new gauge of uncertainty in a world that has “thrived” off USD weakness. USD weakness tends to indicate higher commodity prices, international credit demand, and demand for risky assets that had driven much of the global demand in emerging market debt markets.

A fascinating piece of work by the head of research at the Bank of International settlements, Hyun Song Shin showed the USD per the DXY is in the works of communicating more about the global uncertainty than the CBOE VIX. Much of his argument centered around the boost higher in USD aligning as a barometer for leverage demanded across the world, which is a predictor of global growth given the large amount of global dollar-denominated liabilities that the BIS has recently tallied north of $3T.

While JPY strength should always be considered in times of global macro stress, the USD strength could continue to keep this strong/weak trade trending higher. The USD is currently second to the British Pound as above the 200-MA on an H4 chart, whereas the JPY & EUR are the two weakest by the same measure as of Tuesday, November 15, 2016:

One technical development that we alerted you to was how USD/JPY had multiple rejections of 99/101 zone. The strong bounces off this level seemed to be indicative of either intervention from Japan to sell the JPY or unwillingness for institutions to hold long JPY positions against the USD below 101. Either way, the sharp move higher in US Yields that has helped fuel the USD rally that continues to persist with US/JPY 10Yr Spread near its widest level in a year at -222.5. While there is an expectation that this move will retrace somewhat, the trend may be shifting higher as we look at the charts.

D1 USD/JPY Chart: USD/JPY Has Broken Months’ Worth of Resistance in the Last Week

Price Action in USD/JPY has seen price pull higher from previously mentioned resistance at the 200-DMA as well as the post-Brexit high of 107.49. Given the sharp rise in yields and the US/JPY sovereign spread widening that we mentioned above, we encouraged traders to be on the watch for USD/JPY rush in or fear of missing out trade that could keep USD/JPY bid. Tuesday’s high above 109 seemed to signal the FOMO trade in play.

One indicator that we’ve long-watched that kept our bias consistently lower has broken. The Andrew’s pitchfork above is drawn off of key pivots that are made from the 2015 high, August 24 low and the lower high in November. This Pitchfork has done an outstanding job of framing price action and keeping our focus lower, but the time appears to have changed. This week’s price action has taken us aggressively through the channel that has framed price action and could be indicative of a larger trend shift that could take us to the ~115/6 if not higher over the coming months.

Last week’s sharp moves are being treated as part a bottoming process. The Bullish view that I’m holding has been validated. This view will remain if the price holds on a closing basis above the 200-DMA at 106.47.