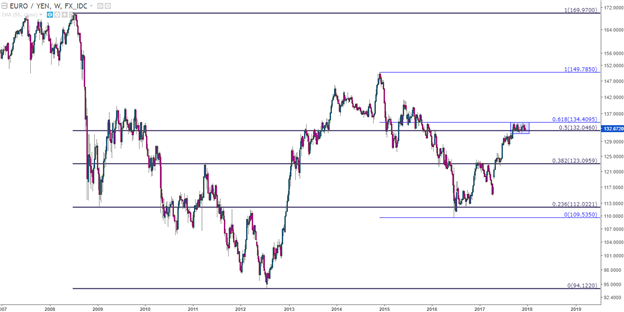 - EUR/JPY continues to trade in the range that’s defined the pair’s price action since mid-September.

- The EUR/JPY range has held through a variety of fundamental drivers, including the ECB’s October rate decision.

- Want to see how EUR and JPY are holding up to the DailyFX Forecasts? Click here for full access.

Perhaps the most compelling part of this range is the context with which it has taken place. The Euro was surging in the early portion of this year as market participants were trying to get in-front of any potential tightening action that might be seen out of the ECB. This didn’t really happen, as the ECB merely decreased the amount of monthly bond purchases at their rate decision in October. But – this did little to dent the range in EUR/JPY, as this simply led to another visit down to support.

This keeps the door open for bullish continuation in the Euro and EUR/JPY as we move into 2018.

From a near-term perspective, traders can move-forward by treating the range with a prior trend-side bias. This strategy would, in essence, look to buy support in the range while not necessarily opening short-exposure at resistance. Resistance, instead, can be used for profit targets and stop adjustments in the event that the topside move does continue, and finally break-out. On a longer-term basis, traders can wait for a sustained breakout above this year’s triple top at ¥134.41 to open the door for bullish exposure. This approach could incorporate targets from prior swing-highs at ¥136.96 or ¥139.02 ahead of the ‘big’ psychological level around ¥140.00. 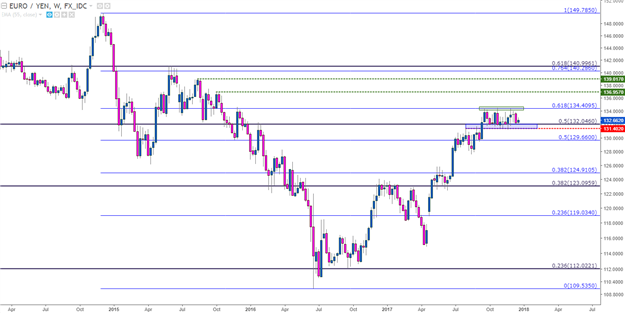