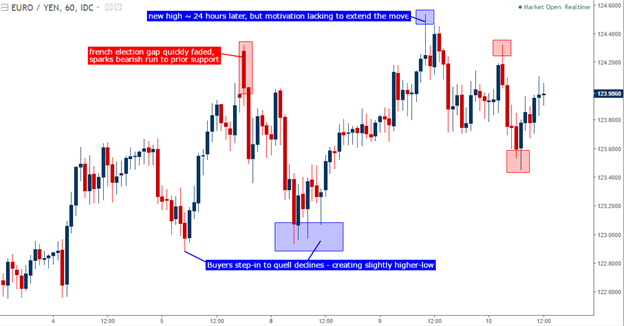 In our last article, we looked at the continuation of bullish price action in EUR/JPY after the prior three weeks saw a significant burst-higher. But as we advised, with Non-Farm Payrolls on the docket for later in the week with the second round of French elections due for the following weekend, traders would likely want to wait for a pullback before looking to chase the move-higher.

Since that last article, Emmanuel Macron became the next President of France and, as many had expected, the Euro gapped-higher when markets opened to start this week. But what likely wasn’t expected was the near-immediate selling that ensued in the Euro, as each of those gaps in EUR/JPY and EUR/USD were filled in fairly short order. This bearish short-term price action continued until support showed up just above a prior swing-low at 122.88. At that point, demand was able to hold the lows until a new high printed approximately 24 hours later.

But what happened after that fresh high is what should get bulls a bit more cautious here, as the Daily chart is looking very toppy with the past three days’ worth of price action unable to extend beyond the prior 11-month high at 124.09. 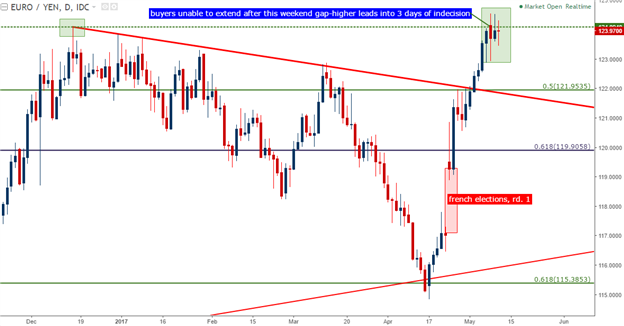 So, while most technical methods will denote EUR/JPY’s current bullish nature, the fact that buyers have been unable or unmotivated to extend price action beyond those prior highs should, at the very least, be noteworthy. And while this does not obviate the bullish stance altogether, it does behoove caution against chasing the move while remaining at these elevated levels. RSI divergence is and has been showing on the 4-hour chart since last week. 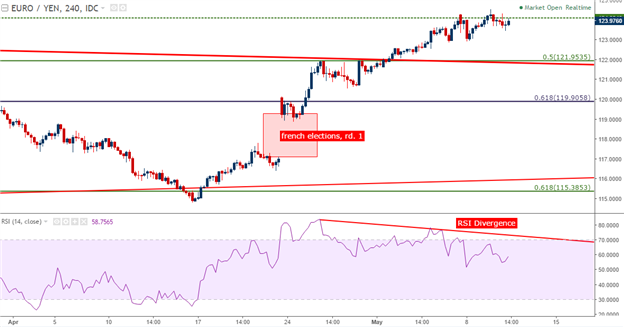 Given the strength of the prior move-higher combined with the rationale and the reasons for the move, traders would likely want to avoid entertaining short-side setups until a clearer setup presents itself as a straight fade of a really strong trend can be a daunting way of playing reversals. But on the long side, timing may be an issue as prices remain elevated as this recent bullish run is looking rather long in the tooth.

On the chart below, we’re looking at two support areas to watch in the effort of catching a ‘higher-low’ for trend-continuation strategies in EUR/JPY. Let this short-term top develop to bring prices-lower in order to afford a more-advantageous entry in the direction of the ‘bigger picture’ trend. If support doesn’t show at either of these levels, do not rush the top-side entry. 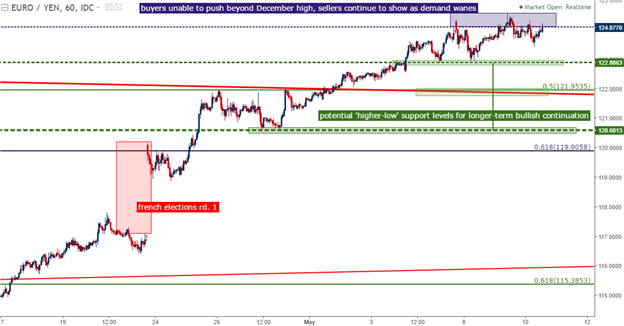