In our last article, we looked at a bull flag formation that was continuing to hold price action in EUR/JPY. This bull flag had lasted for over three months as the pair digested election-fueled gains. But after a support break of a really big level at ¥120.00, traders were likely going to want to wait for bullish price action to show before plotting strategies for top-side continuation.

That bullish price action never showed up; and as we entered the month of April, worries around French elections helped to drive weakness in EUR/JPY as the pair hurdled-lower by four more big figures. Support eventually showed up just a bit below the psychological level of ¥115.00, after which a momentous rally has taken place to volley price action right back up to another level of interest around ¥117.50. The zone around ¥117.50 is a key area to watch for a number of reasons: Not only is this a psychological level but just a bit-lower at ¥117.46 we have the 50% retracement of the July-December major move from last year; and when prices were falling this area caught three days of support before finally succumbing to selling pressure. 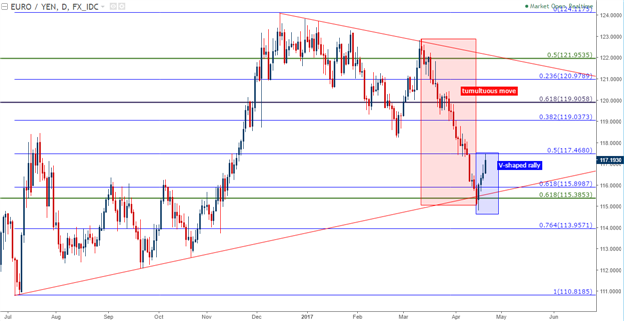 For short-exposure: this would be the current bias given the veracity of the prior move-lower, and also taken from the fact that the recent rally has yet to cross the 38.2 or 50% retracement markers of that most recent move-lower. Should resistance hold around this zone of ¥117.50, the door could be opened for bearish strategies with eyes on the area around ¥118.50 for stop-placement. Short-side strategies would likely want to incorporate targets around ¥115.90, and ¥115.00 for scaling-out of positions. 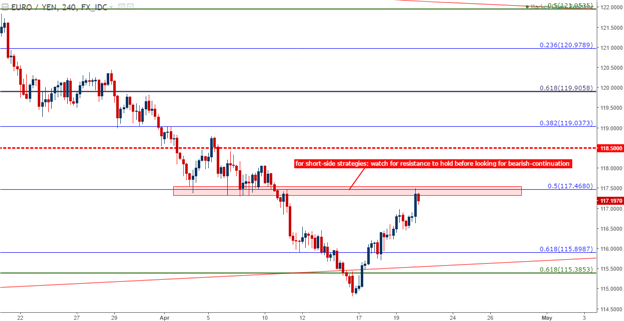 For top-side strategies: Traders would likely want to wait for a bit of confirmation before chasing a move that’s already put in significant run in the effort of controlling risk. Trying to buy a reversal with a +300 pip stop can be a dangerous way of going about matters, so traders will likely want to try to find a way to control risk. This can be done in one of two ways when trading a reversal: 1) Let price action break above resistance, and then look for support to show-up around that same level. This would be around the same ¥117.50 zone. Or 2) trade the move much shorter-term, and look to buy a ‘higher-low’ in the shorter-term move in the effort of taking prices back up to resistance. 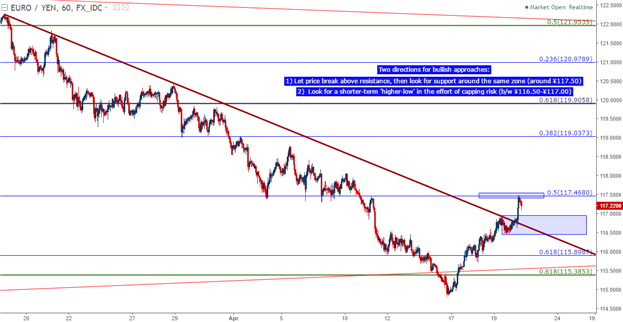