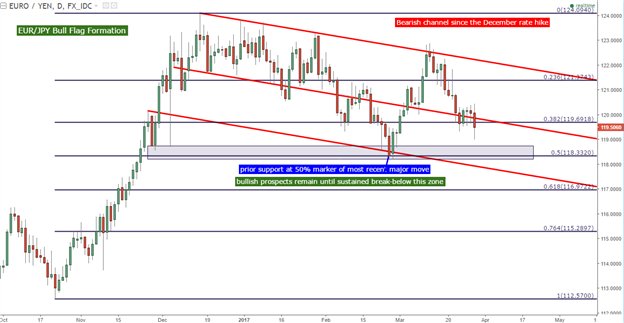 In our last article, we looked at EUR/JPY as price action worked-around a pivotal psychological level at 120.00. As we had shared, the zone around 120.34 could be attractive for short-term bearish continuation prospects, and after a few days of resistance showing around that level, prices have fallen back-below support to establish a fresh short-term low.

But as that low came-in this morning, we saw buyers return to cauterize that move rather quickly. This highlights the bigger picture setup in EUR/JPY, which has been slightly bearish since the Fed’s December rate hike; but still bullish on net when taken in consideration of the previous bullish move. This creates a bull flag formation as shown below:

With a big zone of potential support approximately ~100 pips below current price action, bearish continuation strategies may be unattractive here until more confirmation is had that bulls may finally relent on a subsequent re-test of this support area. More interesting, however, would be a reversal of short-term bearish price action into the direction of the longer-term bullish trend. This would entail support continuing to show above the February low in order to create a ‘higher-low’; at which point bullish strategies can become favored again in anticipation of another re-test of resistance and, eventually a top-side break to continue the bullish pattern.

Below, we look at what traders can watch for in the effort of setting-up with this theme. 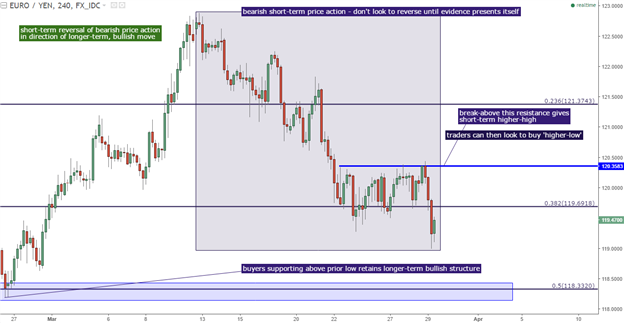