In our last article, we looked at the prospect of a fresh trend forming in EUR/JPY. As we had written, given that price action had throttled-higher with such aggression, traders would likely want to wait for a cleaner setup before looking to chase the young trend while so near highs. But it was the reasons for that aggressive top-side price action that would likely drive traders to looking for weak-Yen setups. The prospect of enhanced stimulus coming out of the Japanese economy could potentially roil the Yen for months, similar to what markets had in 2012-2013 as ‘Abenomics’ first took the world by storm.

But those efforts, at least at this early stage, have largely fallen flat. The Bank of Japan underwhelmed markets by not triggering the monetary ‘bazooka’ that many were looking for at their July meeting, and then the Japanese budget unveiled earlier this week indicated less fiscal stimulus than what was being expected. This has driven stimulus bets out of Japanese markets, in both the Nikkei and the Yen, as hopes are diminishing for the delivery of that ‘bazooka’ of stimulus, and this is driving price action towards longer-term support levels that could make short-side continuation an unattractive prospect, outside of any bigger-picture major macro sell-offs.

Underneath current price action are three longer-term support levels of interest, with 112.00 being the 76.4% Fibonacci retracement of the 2008 high to the 2012 low; 110.81 functioning as the July ‘swing-low’ in the pair, and 109.19 being the ‘Brexit low’ in EUR/JPY. These levels can be utilitarian, as traders can use these as short-term profit targets for faster strategies looking to take advantage of near-term bearish momentum. But for traders with longer-term outlooks or approaches, more interesting and more attractive from a risk-reward standpoint could be support coming-in around either 112.00 or 110.81. This could open the door to top-side strategies in anticipation of the September BoJ meeting. Outside of any major macro-economic ‘risk off’ events, we’ll likely see markets attempting to anticipate another increase in stimulus out of Japan ahead of that rate decision. 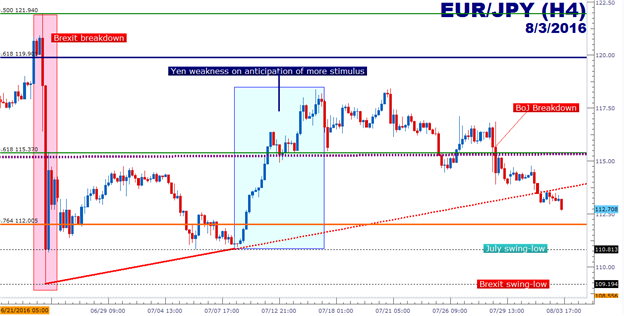