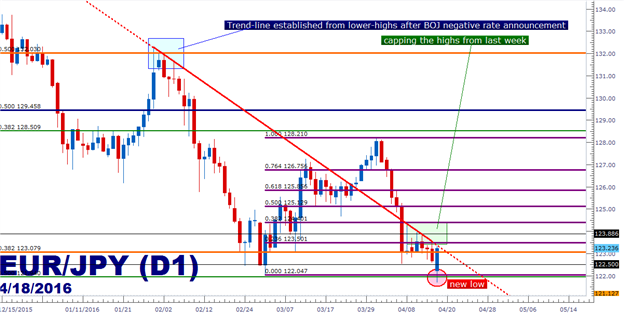 In our last article, we looked at a top-side reversal setup off of the basis of support at 123 in EUR/JPY. One target was hit at 123.75, but the remainder was stopped out after prices began a turn-around on Friday, with a resistance inflection off of the 23.6% Fibonacci retracement of the most recent major move at 123.50 (shown in purple on the below chart).

But this also syncs up with lower-highs that had printed earlier in the week; and if the trader projects that trend-line from last week’s highs (shown in red below), that will run into the batch of lower-highs that came in shortly after the Bank of Japan made the move to negative rates at the end of January (each section illustrated with a box on the below chart, blue for the first instance and green for the second).

Chronologically speaking, the trend-line from the lower-highs set just after the BoJ made the move to negative rates has likely come back into play, at the very least, to offer near-term resistance in EUR/JPY. And given the fact that a new low was made earlier today, this would indicate that the down-trend in the pair may not yet be over.

The combination of these factors could amount to a short position later in the week, but given the veracity of this morning’s bounce, traders would likely want to treat pending short positions with caution. The short setup could become attractive later in the week should resistance show at a deeper level, even if this projected trend-line becomes violated. Levels of interest for potential resistance are at 123.50 (prior swing high, and 23.6% Fibonacci retracement of the prior major move), and then 124.40 (the 38.2% retracement of that same move).