It’s been a tumultuous couple of months for the Yen. We opened February shortly after the surprise move by the Japanese Central Bank to invoke negative rates; and despite that move being designed to spur Yen weakness, we’ve seen a significant wave of the opposite. Yen strength has reigned across markets, even though risk aversion has appeared to recede in other major markets like stocks, oil and emerging markets.

This is likely related to the increasingly uncomfortable position that the Bank of Japan finds itself in after three-plus years of Abe-nomics has been unable to counter the deflationary tides. Frankly, there are very few Japanese government bonds for the Bank of Japan to buy. So as of Halloween 2014, they began to use QE to buy stocks. Not more than a year later, the Japanese Government Pension and Investment Fund reported a $6.4 Billion drawdown after the equity volatility of August and September, and this only added further stress to the prospect of even more QE out of the Bank of Japan.

These are all likely contributing factors to the continued strength in the Japanese Yen. And when the BoJ meets next at the end of April, these will likely be primary themes of the market’s interest. But for now, we have what could be a deductive setup in EUR/JPY. As in, Yen strength has shown quite visibly against both USD and GBP as both pairs have set new intermediate-term lows over the past week. EUR/JPY, on the other hand, has not and is continuing to see support on a long-term Fib level. At 123.07 (shown in Orange on the below chart) we have the 38.2% Fibonacci retracement of the secondary move, taking the 2008 high to the 2012 low in the pair, and this level has given three days of support over the past three days. But perhaps more enticing is the fact that this recent batch of lows is above the low set in early March, which is what makes EUR/JPY an outlier given that both GBP/JPY and USD/JPY are well-beneath those March lows.

Traders can potentially look at reversal plays here. As always the case with reversals, traders need to address the risk-reward of the setup at the outset because, frankly, you’re swimming against the tide if trading a reversal. The low on Friday came in just above 122.50, and this could be an anchor point for an aggressive stop (below support given the long setup). This could open the door for profit targets at 123.75 (for an approximate 2:1 risk-reward), followed by 124.40 (38.2% retracement of most recent move), and then 125 (major psychological level).

For those wanting to go with a more conservative stop, the March low of 122.05 could be utilized, although this extra risk would denominate deeper profit targets at 125 or more to offset this additional risk. 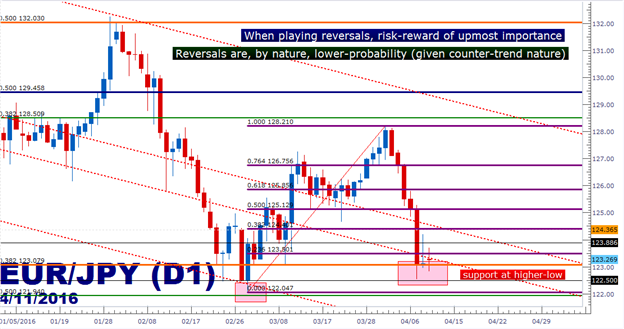