EUR/GBP has risen just under two percent after bottoming-out in mid-December, around the same time as investors witnessed the outcome of the market-friendly UK election. The pair briefly spiked above a critical congestive range between 0.8597 and 0.8642 (gold-dotted lines) amid thin liquidity during the holidays. The pair is now struggling to break higher as it lingers between 0.8454 and 0.8500 (white-dotted lines). 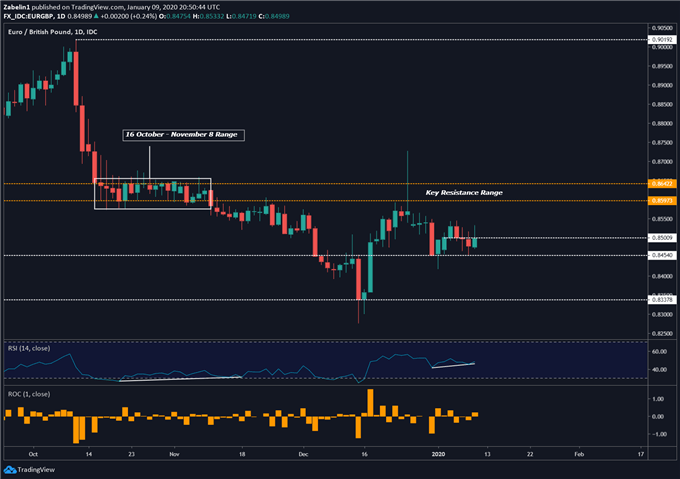 Despite the pair’s relatively-directionless trading since mid-December, positive RSI divergence shows downside momentum is fading. This lends credence to the notion that the pair may attempt to stage a breakout above resistance at 0.8500, opening the door to re-testing the multi-tiered ceiling above it. The last time the pair narrowly traded within these boundaries was during the lead up to the UK election.

Looking at a weekly chart shows how EUR/GBP briefly tested two-year lows amid political optimism before bouncing back amid a resumption of no-deal Brexit fears. Due to the nature and impact the EU-UK divorce has on Sterling, performing technical analysis on any GBP-crosses would be difficult without looking at the fundamental forces guiding it. 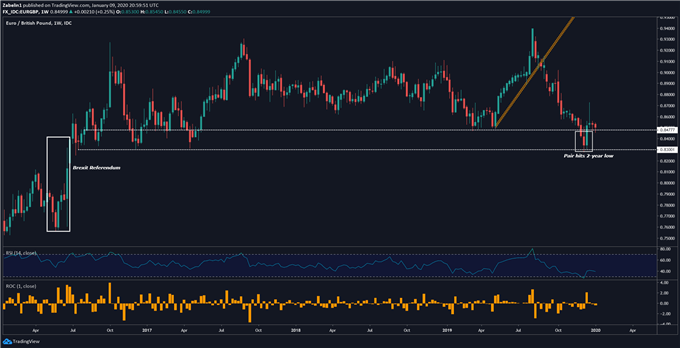 Brexit: What’s Next, How Will it Affect British Pound?

On Tuesday, Parliament voted 330 to 231 in favor of the Withdrawal Agreement Bill, with the legislation now heading to the House of Lords. If it is approved, the UK will officially depart from the EU on January 31 and trigger the beginning of the 11-month transition period where MPs will discuss future trade relations. This is where uncertainty about the EU-UK relationship may help push EUR/GBP higher.

Shortly after spiking on the UK election, the British Pound over the next few days effectively erased its gains, following a worrisome announcement from Prime Minister Boris Johnson. He said that he does not want to extend the transition period beyond December 31, 2020 deadline. This resurrected no-deal Brexit fears as policymakers expressed angst about the PM’s ability to ratify a trade deal in less than a year.

It is this same anxiety that may continue to keep the British Pound under constant pressure unless major developments on UK-EU relations are made and cool fears about a no-deal Brexit. To learn more about this, be sure to sign up for my weekly webinar where I outline major geopolitical risks in the week ahead and their impact on financial markets.