Since October 16, EUR/GBP has been stuck in a congestive range between 0.8597-0.8642. Positive RSI divergence suggests the pair may attempt to launch an upside breakout, but a myriad of fundamental catalysts in the week ahead may facilitate a downward breach. The pair’s sideways trading comes after a significant fall where it shaved off almost four percent in less than a week and is now hovering at six-month lows. 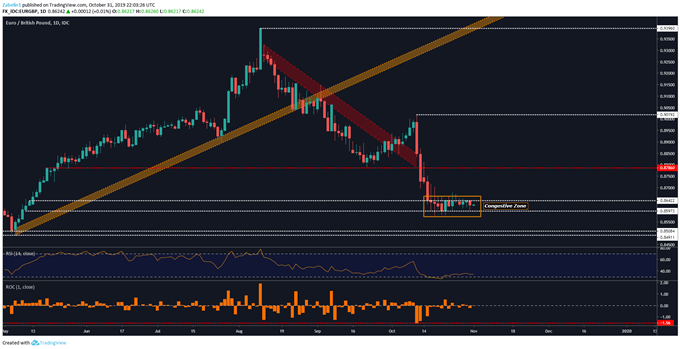 When analyzing British Pound crosses, it is difficult if not outright impossible to analyze GBP in a void. Its recent moves have to be understood in the context of Brexit. Part of the reason why Sterling may not make any significant moves by itself in the week ahead has in large part to do with the UK’s political scene.

For the next few weeks, lawmakers will be campaigning to win over the hearts of their constituents before the December 12 election. In the interim, moves from the British Pound may be relatively tame until the day when the ballots are cast is closer and polling information reveals which candidate is likely to win.

Therefore, EUR/GBP’s price moves will likely come from oscillations in the Euro’s value which will then be reflected in a weaker or stronger exchange rate in the pair. Given the week’s outlook, traders may see the Euro weaken against its major counterparts which could then cause EUR/GBP to tilt towards support in the congestive band. 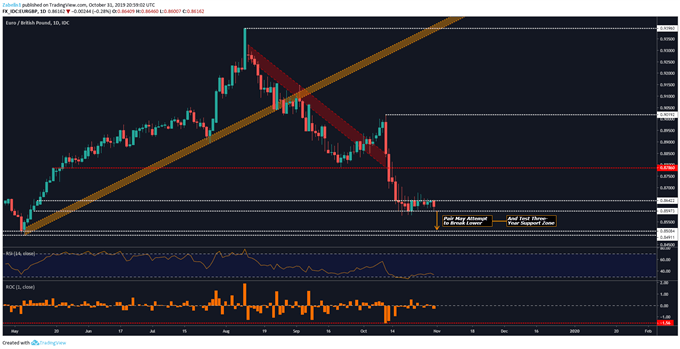 A break below that with follow-through opens the door to testing a two-layered, three-year old support zone that was established shortly after the Brexit referendum. While the British Pound has recently had a notable rally, its price action is not as impressive when contextualized over a longer timeframe. EUR/GBP is hovering broadly within the same range it has been trading in since the 2016 referendum. 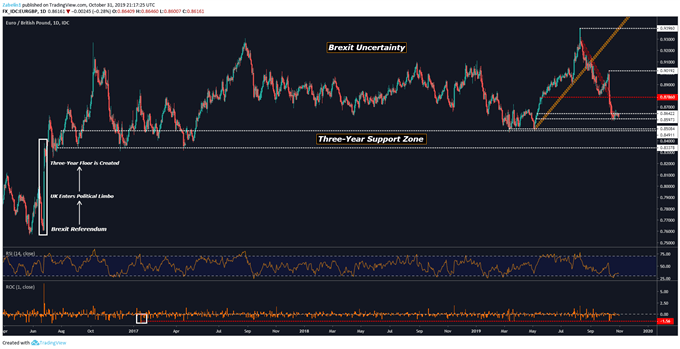 Where it goes from here will be largely determined by the election and ability of the newly-formed government to pass a Brexit deal and avoid crashing out of the EU. Looking ahead, despite upside technical cues, a number of key catalysts will likely push the Euro lower and facilitate EUR/GBP’s downside breakout.