The Euro’s uptrend against the British Pound, initiated by a Bullish Harami candlestick formation in May, is looking increasingly at risk from a technical perspective. Taking a look at the EURGBP daily chart and focusing on price action since May 21, a rising channel of support appears to have been taken out, with a psychological barrier forming at 0.8872.

Breakouts should require confirmation to mark a turning point, and a daily close under 0.8872 could be just that. In such an outcome, that opens the door to testing the next area of support between 0.8838 and 0.8811 before exposing 0.8698. In the event of a false breakout, extending the dominant uptrend since May places resistance at 0.8953, the outer boundary of a barrier that if taken out, foreshadows a test of December highs. 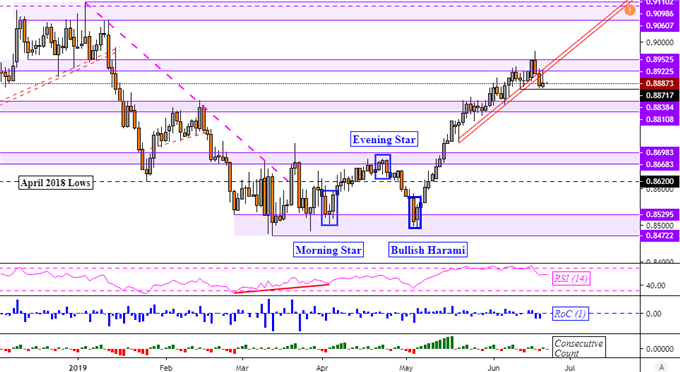 Zooming out to the weekly chart reveals another warning sign that a reversal could be brewing. A Shooting Star appears to be on the verge of forming, indicating indecision. If confirmed at the end of this week’s close, another five days of declines verifies this potential bearish setup. For updates on EURGBP until then, you may follow me on Twitter where I will be tweeting about it here @ddubrovskyFX.

EURGBP IG Client Sentiment still indicates heavy net-short positioning, offering a stronger bullish-contrarian trading bias. Yet, it is not as aggressive as what we have seen earlier this month. If this is the turning point and we see an unwinding of net-short trades, this could further support the case of a top in EURGBP.

Join me every week on Wednesday’s at 00:00 GMT as I uncover what market positioning has to say about the prevailing trends in currencies, equities and commodities 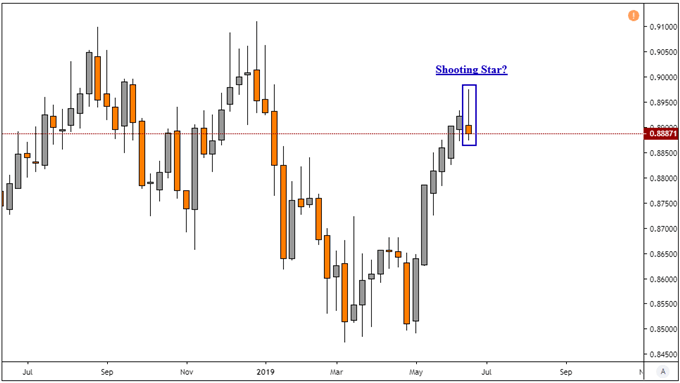