Following a bullish reversal warning sign pointed out last week, EUR/GBP clocked in its best single day performance since June 2016. Fundamentally, weakness in the British Pound was as a consequence of the sudden increased probability that the UK could be heading for a ‘hard Brexit’. Significant and volatile moves in FX do open the door for new setups in technical analysis to see where prices may go next.

For EUR/GBP, multiple resistance barriers were knocked out within a span of 24 hours. But on the daily chart, we do have the formation of what appears to be a new descending trend line dating back to August. For the time being, this may keep the dominant downtrend since then intact. A push above the line would open the door to overturning the downtrend.

However, this would require ascending through the October high at 0.89394. Until that target is reached, a lack of confirmation would prevent arguing that the pair may be heading for a lasting uptrend. Should Brexit volatility manage to drive the pair beyond that, the next area of resistance to test would be the rising range of support from April (see rising red channel on the chart below).

Meanwhile, should the Euro start losing ground against the British Pound again, near-term support appears to be the 38.2% Fibonacci extension followed by the 50% midpoint at 0.87518. Beyond that, EUR/GBP will have to manage descending through the current November lows. This is composed of a range between 0.86683 and 0.86983 which combines May and March lows. 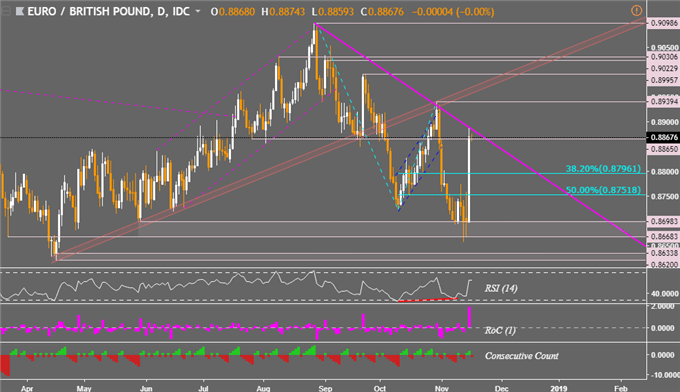