EUR/GBP is facing its next major test that potentially places its uptrend over the past couple of weeks at risk. It began with a hammer bullish reversal pattern on the weekly chart that formed during the second week of October. Prices reached as low as 0.87237 (around the June 2018 low) before buyers took the pair back to near where it opened. Since then, EUR/GBP rebounded about 1.72%. But the dominant downtrend since late August remains intact. 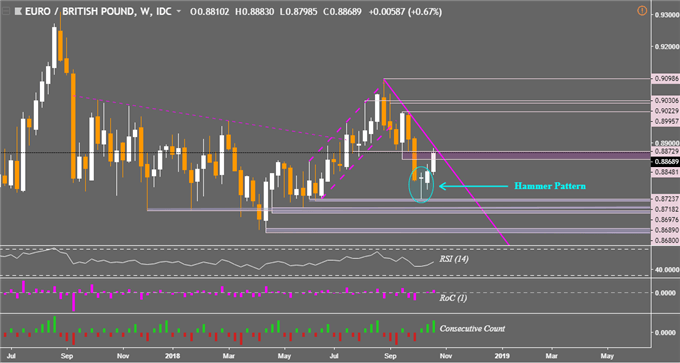 Zooming in on the daily chart reveals a rising channel that has guided EUR/GBP to its next critical resistance barrier. This is a descending trend line from August. Prices attempted to break above that line, but it proved to be short lived and the close of the most recent candle has the pair sitting squarely at resistance. This is right around 0.88729 which acted as former support over the past four months or so.

Combining that with 0.88481 (the September 20th low) gives us a horizontal range of resistance (dark purple area on the chart below) that if pushed through, may allow EUR/GBP to resume its near-term uptrend. However, there is a warning sign that its next leg could be a descent towards rising channel support. 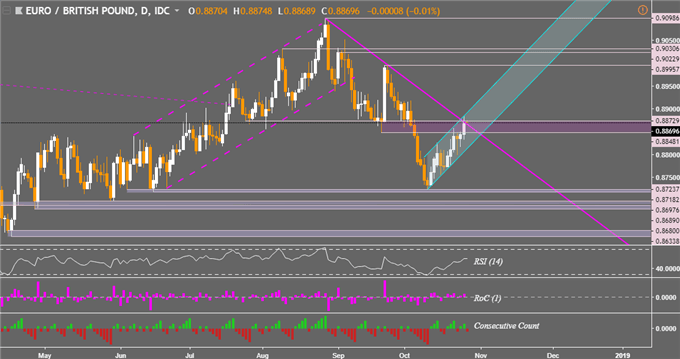 Looking at the EUR/GBP 4-hour chart reveals negative RSI divergence showing that upside momentum is fading. This warns that the pair’s next move could be lower. Still, for the Euro to show signs of resuming its decline against the British Pound, I would like to see a descent through the rising channel. That would expose the October 10th low. 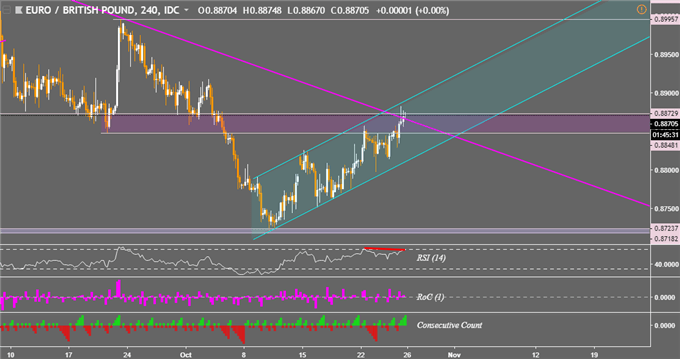