SNB Emboldened After US Treasury Report

The Swiss Franc has seen heightened volatility as the calendar turns through the ides of December, thanks in part to several significant macroeconomic developments converging simultaneously. The Franc has fallen out of favor vis-à-vis EUR/CHF and GBP/CHF rates as the prospect of a Brexit deal has reduced the need for Europe’s safe haven. Further dampening the reach for safe havens globally has been news that the US Congress is close to agreeing to a new tranche of fiscal stimulus.

But perhaps the most interesting news of the day has been that the US Treasury has added Switzerland to its list of countries its considers “currency manipulators,” joining with Vietnam the hallowed ranks with China as the only other country to be designated a manipulator. Currently, China, Japan, South Korea, Singapore, Malaysia, Germany, and Italy are on the US Treasury's watch list. The Swiss National Bank’s response was swift and indignant, refuting the claim that Switzerland was a currency manipulator by saying that it was “willing to intervene more strongly in [the] FX market.”

From this strategist’s perspective, it almost sounds like the SNB will now press for more Swiss Franc weakness just to stick a finger in the US Treasury’s proverbial eye. And with global risk appetite turning higher thanks to the waves of promising global macroeconomic developments, pairs like EUR/CHF and GBP/CHF have the opportunity to turn higher towards range resistance carved out in recent months. 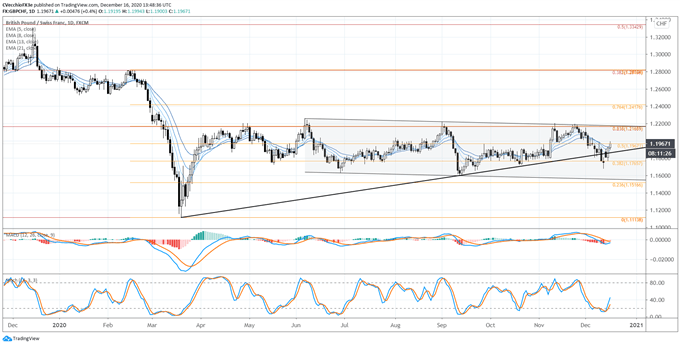 GBP/CHF rates have rebounded sharply in recent days on the back of positive news on the Brexit front. The rebound at the rising trendline from the March, September, and October lows, following the bearish breakout attempt, confirms that “traders are unwilling to throw in the towel on a potential bullish move higher,” as noted in the last update.

Momentum is starting to turn the corner higher. GBP/CHF rates are trading above their daily 5-, 8-, 13-, and 21-EMA envelope, which is in neither bearish nor bullish sequential order. Daily Slow Stochastics are trending higher into their median line, while daily MACD is narrowing while just below its signal line.

It still holds that GBP/CHF rates are in the middle of a range, neither near support nor resistance within the consolidation. But recent price action suggests that a return to range highs near the 61.8% Fibonacci retracement of the 2020 high/low range at 1.2167 can’t be ruled out through the rest of the month. 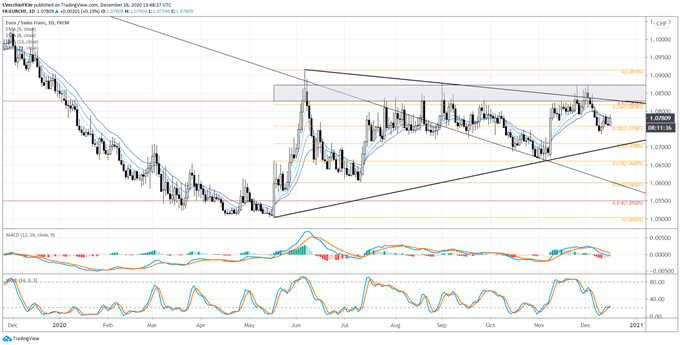 In our last update, it was noted that “weakness within the symmetrical triangle is back in play, suggesting that EUR/CHF rates could fall back towards 1.0700 over the coming weeks. Granted, news of a Brexit deal could spur a bullish reversal in EUR/CHF rates well before reaching 1.0700, given how low expectations are for any deal emerging at this juncture.” Indeed, EUR/CHF rates fell back as far as 1.0736, but recent Brexit news has helped spur a reversal high.

It still holds that “gains through 1.0878 in the coming weeks would offer a strong sense of confidence that not only is the symmetrical triangle bullish breakout gaining pace, but that a longer-term bottoming effort has been commenced.” 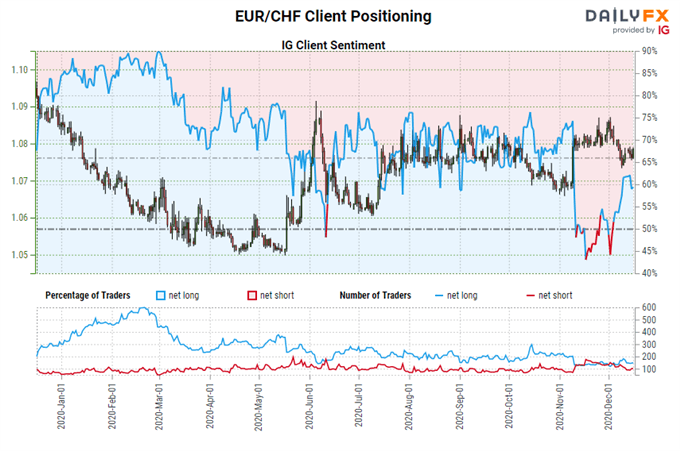 Positioning is more net-long than yesterday but less net-long from last week. The combination of current sentiment and recent changes gives us a further mixed EUR/CHF trading bias.