The Great Lockdown of 2020, also known as the ‘Coronacession’, has been unprecedented in its disruption of the global economy. Recent Australian economic data is now beginning to reflect the fallout from the actions taken to fight COVID-19, with the unemployment rate spiking to 6.2% in April and the participation rate (63.5%) falling to lows not seen since 2005. 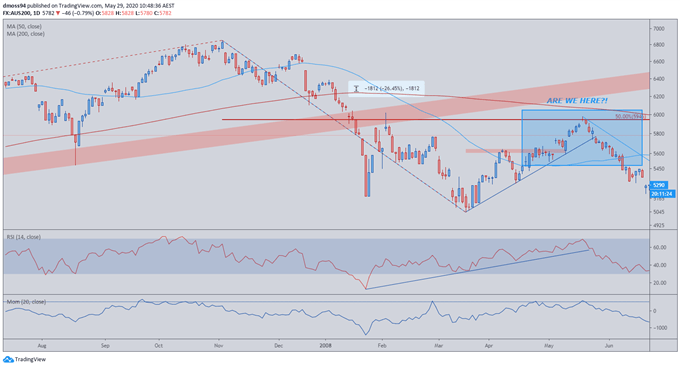 After finding support at the 5,000-handle in mid-March, prices grounded back to the 50% Fibonacci retracement (5,946) of the selloff, just 100 points short of testing the 200-day moving average. RSI proved to be an early indicator of an impending reversal, with the oscillator unable to break into overbought territory. The end of May proved to be a major turning point for the ASX as it erased the ground gained since the March-low, in a little over 4 weeks. 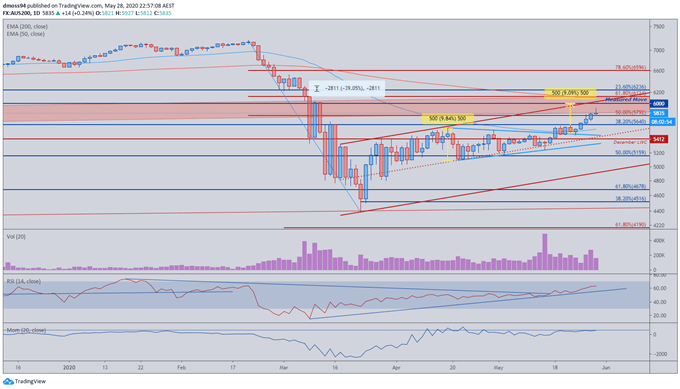 June may be a pivotal month for the ASX 200 and it could see the 200-MA (6,100) continue to cap upside potential, pushing prices back towards the March-low (4,383). The 6,000-level proved to be the line in the sand for the 2008-relief rally and could be a key level to watch in the coming days, as prices begin to test 2009 trend support-turned-resistance. A bullish break through Symmetrical Triangle resistance forecasts a measured move of 500 points (6,000) as RSI creeps devilishly close to overbought conditions.

The oscillator could provide an early indication of bearish sentiment should it break down prior to registering extreme bullish readings. Formation of a bearish ‘Shooting-Star’ daily candle, just above the 50% Fibonacci level (5,792), may underscore the weakness in this rally and could ignite a fresh wave of selling. A break of the 38.2% Fibonacci (5,640) would open up a path back to test the March-low (4,387). 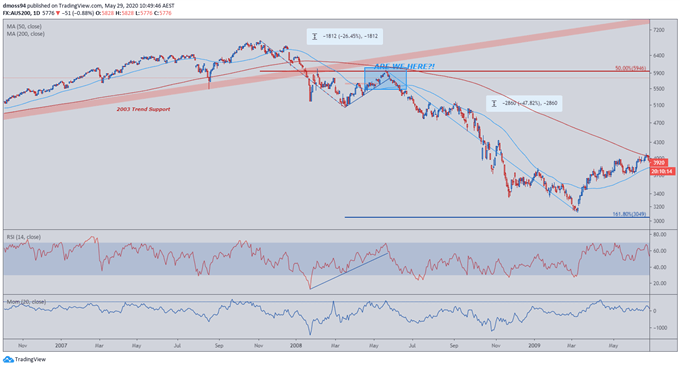 After capitulating just shy of the 200-MA in 2008, prices collapsed 2,860 pointsbefore bottoming just above the 161.8% Fibonacci extension (3,050) of the first quarter decline. Should this scenario play out in 2020, the ASX 200 could fall to as low as 1,450; levels not seen since the last time Australia fell into a recession 28 years ago. Could we really see the Australian benchmark fall over 70% in the next 12 months? Although that outcome is almost unfathomable, the 2008 GFC serves as a stark reminder of just how quickly a recovery can be erased in a bear market.