The ASX 200 is in some danger of flagging a significant reversal on its daily chart, but investors now uncommitted may be well advised to await events.

Fundamentally the index has been hit as have others around the world by the re-pricing of US interest rate expectations. Before last Friday’s surprising blockbuster employment data the market had looked for two quarter point reductions. Now bets have been pared to take that back to just one.

And it’s this coincidence with fundamental events which make makes chart signals perhaps less-than trustworthy. At face value the ASX looks to be in some danger of making an Evening Star candlestick formation. That would be a strong signal that its rally may have topped out. 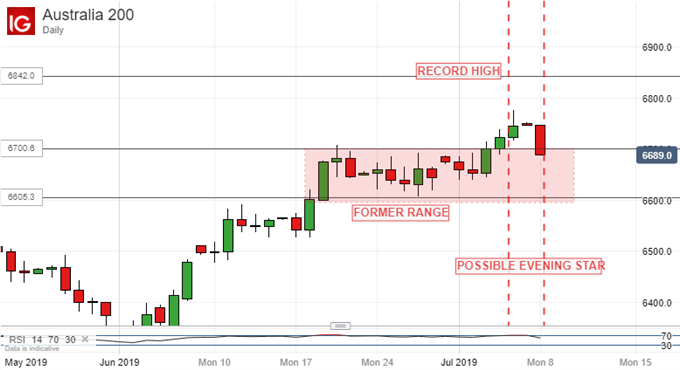 It’s perhaps notable too that the index faces a possible relapse back into its former range and, also back within the uptrend channel which had contained trade from February 5 until late June brought an upside break.

Still, Monday’s downward pressure has come at a time when all Asian mainboards are lower. Moreover, the mid-session daily candle of this putative Evening Star is a Sunday. That’s a day on which trade volumes are light, and on which we can expect to see such small differences between opening and closing prices.

So, it might be best to play ASX downside very gingerly until more evidence is in. If the former range base around 6605 holds through this week, then it will be clear that the bulls retain some fight, at least for the near term. A renewed push up toward record peaks would seem quite likely in that case.

Deeper falls below that old range need not necessarily be terminal for the bullish case, indeed the index does look quite comfortable at altitude. Even the first, 23.6% Fibonacci retracement of the rise up from the lows of December last year doesn’t come in until 6,229. Wariness will of course increase if that starts to get close, however.