The ASX 200 is still testing the top of its dominant uptrend channel, but the bulls have obviously not given up hope of driving onward to the record peak, now fewer than 200 points above the market.

The fundamental story looks clear enough. The prospect of lower global interest rates (not least in Australia), has given most major stock markets a lift. Last weekend’s news that China and the US have shied away from imposing further tariffs on each other’s imports may not be quite the trade progress markets desperately need, but at least the two titans are still talking.

It may be that markets are overpricing the extent of likely easing. For one thing the US President has said that tariffs against Mexico are now off the table, and that prospect was a big part of the latest re-pricing of US rates. Other central bankers, notably Australia’s Philip Lowe, have wondered aloud about how effective further rate cuts might be.

Still the Australian Dollar has also slipped a little against its us cousin, possibly burnishing the appeal of domestic stocks to offshore buyers.

Technically the ASX has been confined to a short term daily chart range between 6605 and 6700 since June 18. 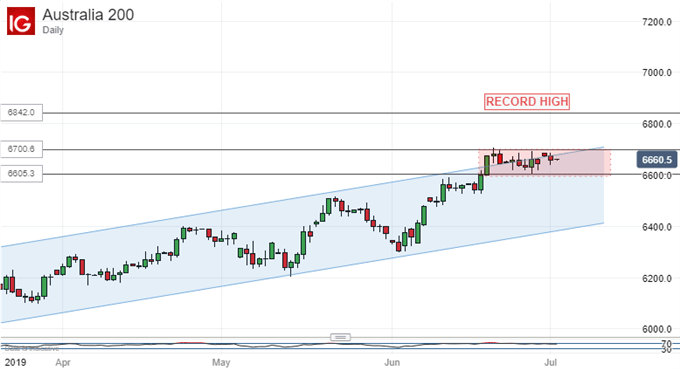 Perhaps maddeningly this has also seen it bounce along the top of that uptrend channel without a conclusive break. Bulls may well see this as a good sign, as altitude has clearly been sustained even as momentum winds back from the overbought levels of late June.

However there have also been many recent days where the gap between the open and the close has been extremely narrow. Spells such as this can indicate heightened uncertainty in a market and the uncommitted may want to see how this one plays out.

It’s hard to get too bearish about the ASX at this point, to be sure, but a clear retracement back into the upward channel could see support from mid-June in the 6570 area tested again, even if it would probably hold barring some bad fundamental news out of left-field.

If however the bulls can hold the line then they’ll try to consolidate above the 6700 range top before girding themselves for another shot at the record.