The ASX 200 has retreated a little from the twelve-year highs made last week and, while it still looks firmly supported is now leaning on interesting technical support.

The Australian equity benchmark managed to break above even the impressive well-respected uptrend channel which had previously contained trade since February 5 but its time above there has been quite short and already the old channel top is coming back into view. 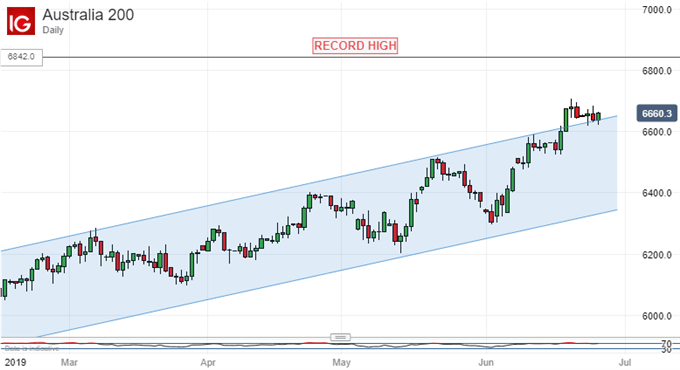 Indeed, that top comes in at 6628, only thirty points or so below the current market. It might be very instructive to see whether this support can hold on a weekly closing basis in a couple of days, and a monthly close early next week.

If it can, then the current modest retreat might well be written off as mere consolidation. After all there has been a very strong June run higher. The month has seen a sharp 300-point upsurge. Some pause for breath is probably very necessary.

However, falls below the channel top could see support between 6607 and 6538 come back into play pretty quickly. That band bounced trade between June 10 and 18. Below that the previous significant high of 6516 would be in focus but, by that stage, the most recent run higher would probably have been conclusively abandoned putting focus on still further falls.

If on the other hand channel support can hold then a climb back up to record highs remains very much on the cards, even if it’s likely to be gradual.

Fundamentally, the prospect of lower global interest rates has supported stock markets around the world, with the ASX 200 no exception. However, Reserve Bank of Australia Governor Philip Lowe has this week again mulled aloud whether extensive rate reductions are likely to work in an environment which has already seen record-low borrowing costs for nearly three years.

Australian rate futures markets certainly fully price in one more reduction for the Official Cash Rate, but that is now surely baked-in to ASX prices too. The bar to deeper cuts may yet be higher than the market thinks. Moreover, lower rates tend to weigh on heavily weighted banking stocks, as they certainly have in the ASX this week.

Still, the technical bias is uncertain in the short term but could very quickly become clearer. It’s probably still to the upside.