The ASX 200 has been hit hard by the general retreat from risk which has come with elevated trade tensions between China and the US.

Australia’s blue-chip benchmark has this week slipped below the uptrend channel which had formerly persisted since February 5 and which was in any case just a continuation of the steady rise seen from the lows of late December 2018. 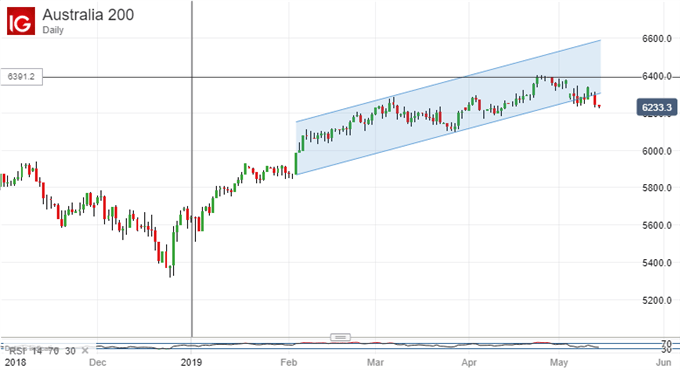 That channel confirmed its importance and relevance to ASX 200 trade between May 7 and 12, during which it provided clear support for the index and deterred bears from further forays. However, it finally gave way with the sharp falls seen on Monday.

Still, so far, the retreat has been relatively modest within the context of this year’s gains. Of those even the first, 23.6% Fibonacci retracement level doesn’t come in until 6146.6. That’s still some way below the market. However, a fall that far would see the index lower than it has been at any point since mid-February and would also mean that all plausible near-term supports, such as mid-April’s lows in the 6186 region had given way.

It's notable too that the second retracement level comes in at 5988.8. Past evidence suggests that bearish approaches to the psychologically crucial 6,000 point would be likely to fall far further below it than that.

Still, for the moment bulls still have cause to hope as long as that point stays comfortably far off and key support above it holds.

To the upside, regaining that upside channel would only require a rise of about 50 points or so confirmed by a daily close. But that doesn’t look likely without the decisive fundamental boost that only a positive US/China trade story seems plausibly able to bring, and which in any case would be extremely hard to predict.

With that in mind the clearest path at the moment probably leads lower, with that first retracement support probably the bears’ initial target. The index is heading down toward oversold territory, however, as far as its momentum indicators go and, while 6000 is still more than 200 points below the market, the index might be judged as quite resilient.