The ASX 200 has ridden this week’s wave of resurgent global risk appetite above the downtrend channel which had previously held since the peaks of March 8 which are also this year’s highs.

The Sydney mainboard has now been above that channel’s upper boundary for three sessions. Still, for all this new-found bullishness it has yet to top that peak, even though it is close at current market levels.

The index is now in a range limited by March 8’s intraday high of 6284.6 and its close, 6239.9. If the bulls can demonstrate comfort within this range over the next few days, then it could well be a sign of bullish consolidation and a prelude to a push still higher. 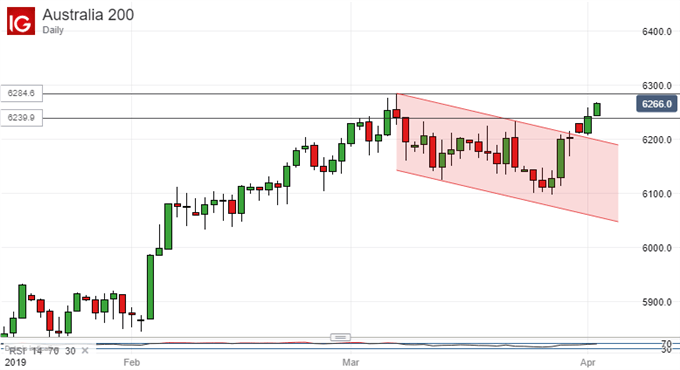 If so that would put focus on the multi-year highs scaled last August in the 6380 region. However, it is worth noting that those peaks did not hold for long, with sellers soon emerging in force, as it often tends to whenever this index spends too much time above the psychologically crucial 6,000 mark. 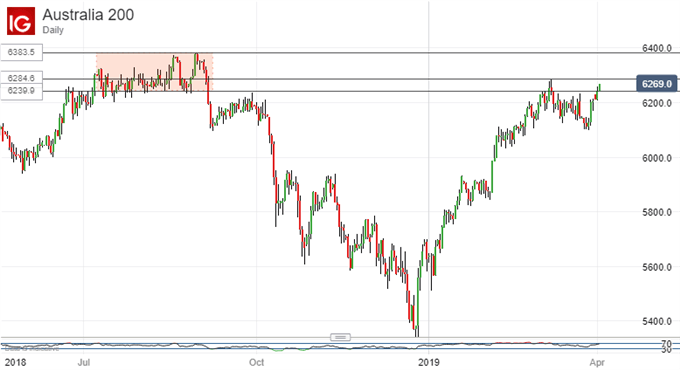 Still, if the ASX can consolidate around current levels a retest of those highs does look likely.

On the other hand, setbacks are likely to find initial support around last week’s lows in the 6100 region. This may not stand up to a vigorous bear test, however. A more enduring prop may be found at 6057.6. That is the first, 23.6% Fibonacci retracement level of this year’s rise.

It is worth remembering, however, that much of the current bullishness has its roots in overall, global risk appetite and, with many uncertainties around, from the US/China trade position to Brexit, this is likely to be a shaky foundation.