The ASX 200 is perhaps performing a little better than many developed-market index in the rather risk-averse final days of 2019’s final quarter, but its downtrend is clear nevertheless.

A characteristic Evening Star pattern visible on the daily chart between March 6 and 8 marks the recent significant top, with a downtrend channel clearly in place ever since. 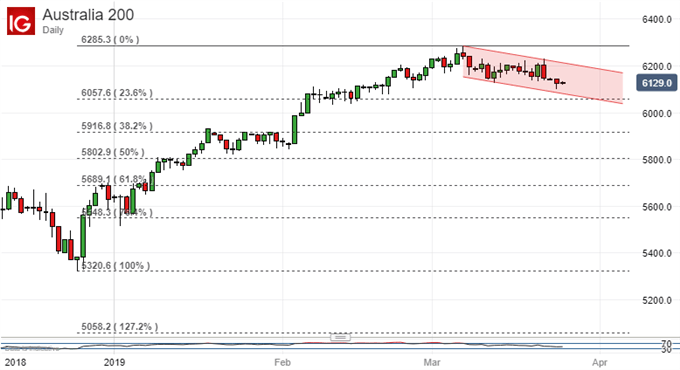 The Evening Star is a reversal pattern, and reversal there has certainly been. All the same it has not yet been a particularly deep one. The Australian blue-chip benchmark remains above even the first, 23.6% Fibonacci retracement of this year’s rise. That lies some way below the market at 6057.6.

Of course, if it were to come into sharper focus, then its proximity to 6,000 could mean that it doesn’t hold for long. That level has been psychologically crucial to the index for years, with periods spent above it measurable in mere months.

The last foray was admittedly quite a long one. It endued between May and October last year. The current tenure above that magic line has only lasted since early February.

We could probably expect a slide below 6,000 quite quickly if that retracement level gives way and, while the downtrend channel holds, its surrender is only a question of time. For the moment, however, channel support around 6080 bears immediate watching. For as long as that holds the theme of a more gradual slide will remain in place.

Bulls will have to top 6215 or so on a daily or weekly closing basis to conclusively break the channel to the upside. They don’t seem to have that sort of resolve. A sustained return to mid-March trading levels around the 6200 area might indicate that they intend to show some fight, however.

Whether you are new to foreign exchange trading or an old hand DailyFX has plenty of resources to help you. There is our trading sentiment indicator which shows you live how IG clients are positioned right now. We also hold educational and analytical webinars and offer trading guides, with one specifically aimed at those new to foreign exchange markets. There is also a Bitcoin guide. Be sure to make the most of them all. They were written by our seasoned trading experts and, best of all, they are free.