The ASX 200 has pushed on into the resistance zone which had previously capped the market since October last year.

The move looks to have sound fundamental underpinnings in the revival of global risk appetite seen for much of this year. Markets have been boosted by signs of increasing monetary-policy caution at the US Federal Reserve and, perhaps more strongly, by hopes for a thaw in trading relations between Washington and Beijing. This week’s news that the US will shelve plans to raise tariffs on Chinese imports at the end of this month certainly helped ASX bulls’ cause.

Technically speaking the index is back into a daily-chart range between 6122 and 6232 which also bounded trade between September 6 and October 8, 2018. On that occasion the range proved to be a mere staging post on the way down to the two-year lows of December, but there is scope for a little more optimism this time around. 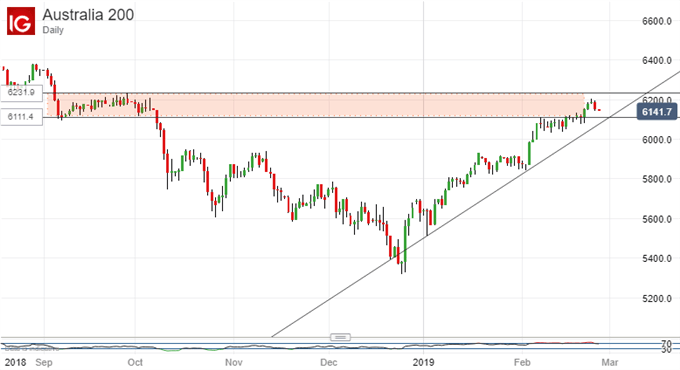 For one thing the index remains well above the respected uptrend line which has held good for much of this young year. That now suggests support is in place around 6077, some way below the current market.

Still, the index is showing some signs of overbuying and loss of momentum. This may indicate a period of consolidation rather than anything more sinister, but the uncommitted may want to await more clues.

Should the index indeed consolidate within the current range, or at least not so far below it as to threaten the uptrend then that might be a quite bullish sign of relative comfort. Don’t forget that the 6,000 level often acts as a formidable psychological barrier to this index, so its ability to hold can be crucial for sentiment.

Bulls probably need not worry too much unless we see a move down toward 5995. That is where the 23.6% Fibonacci retracement of this year’s rise kicks in at present. If that can’t be defended I’d expect to see market focus move toward a deeper pullback. However, consolidation around current levels may yet lead to further gains.