The ASX 200 has broken below the uptrend channel which previously bounded trade between late December’s lows and the peaks of mid-January.

Still, despite that break the Sydney stock benchmark has not so far fallen very far and, indeed, seems to have settled back into a familiar range. 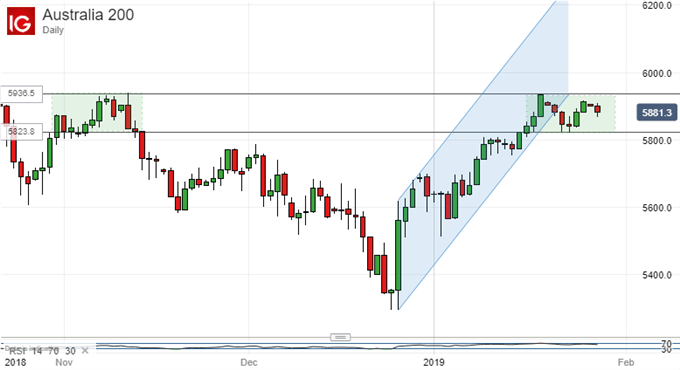 Its current trading band comes in between 5823 and 5936. That was also the daily chart range between October 30 and November 13 last year. On that occasion the range broke to the downside, presaging a sharp fall down to those December lows.

This time, however, much may depend on the fundamental news flow with which this week is replete. If the US Federal Reserve sounds more cautious about future interest rate rises, then stock markets worldwide could get at least a knee jerk boost. Signs of rapprochement on trade when Chinese officials meet their US counterparts in Washington could have much the same effect. Then there’s Australian inflation data. The weakness expected to be seen here on Wednesday might also give domestic stocks a lift on the thesis that interest rates will remain low, although the heavily weighted banking sector might well dislike such an outcome and act as a drag.

In any case the bulls may well find progress slow, even if they can break the range top. The next clear upside target would be some way above the market at 6144. This was where October’s steep falls began and it will probably be a slow slog back up to that level, one providing those bulls with many tests of nerve.

If the range breaks to the downside then meanwhile then its first support looks likely to come in at 5785.0. That is the first Fibonacci retracement level of the rise up to January’s peaks from the lows of late December.

Whether you are new to trading or an old hand DailyFX has plenty of resources to help you. There’s our trading sentiment indicator which shows you live how IG clients are positioned right now. We also hold educational and analytical webinars and offer trading guides, with one specifically aimed at those new to foreign exchange markets. There’s also a Bitcoin guide. Be sure to make the most of them all. They were written by our seasoned trading experts and they’re all free.