The ASX 200 has retreated even further from its psychologically crucial 6,000 level and indeed has returned to lows not seen previously since early 2017.

The daily-chart downtrend from late August’s peak is now quite entrenched. Indeed, it has accelerated sharply in the past month or so. There seems little reason to hope for a sustained reversal anytime soon either. The index like most others is fundamentally in thrall to trade-related global risk appetite. This can turn on a dime, as we saw between late October and early November when the ASX bounced, so fundamental predictions are unusually tough to make.

However, technically speaking, the Sydney equity benchmark now has its short-term gaze firmly on October 26’s intraday low of 5608.3. That is coming uncomfortably close to the bulls even if so far it is holding on a daily closing basis. 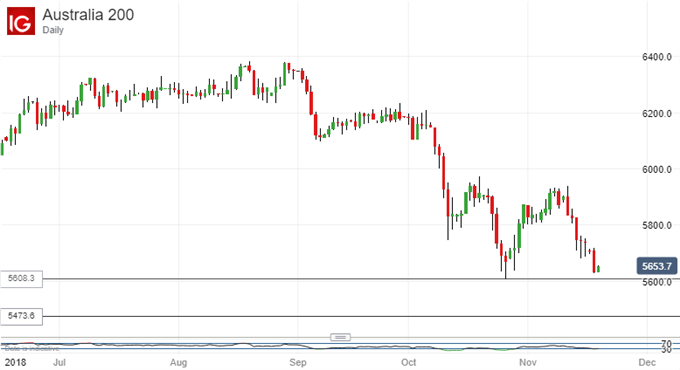 Should it give way then markets can probably expect another leg lower, at least, with the March 2016 lows around 4624 possibly beckoning in the medium term. What should probably worry bulls more however is that more weakness from this point could put the monthly-chart uptrend channel stretching all the way back to the financial crisis’ ‘end’ in March 2008 under some pressure. 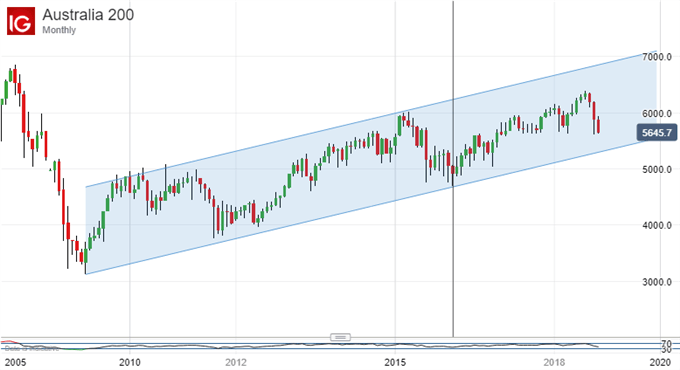 Of course, that channel may no longer be especially relevant. It has after all seen no upside tests since its early months apart from a brief one in 2016. However, there is another, clear shorter-term uptrend from January 2016 within it which could also come under threat. In any case this longer term trend bears watching.

The index is currently more or less exactly on the first, 23.6% Fiboancci retracement of the rise up from those March 2009 lows to the highs of this year. Moreover next level doesn’t come in until 5138.2.