Sharing the pain of October’s risk aversion with many other stock indexes, the ASX 200 has shed nearly 9% in October and printed new lows for 2018 in the process, and the bears still appear to be in control.

Last Friday’s intraday base of 5610 was that new low, just under the previous one- printed on April 2. Perhaps most significantly the index has slipped sharply below the key 6000 level, after its longest foray above that psychologically important point for more than ten years.

Regaining that point looks like a huge ask for the bulls in the short or even medium terms, with focus still squarely on the downside. The index’s sharp falls have halted so far above a cluster of support whose fate is likely to be key to near-term direction.

The first of these comes in at 5610.9. That was the base of a broad, enduring range which was in play between the December of 2016 and May this year. It was tested in the past week on an intraday basis but has so far held. 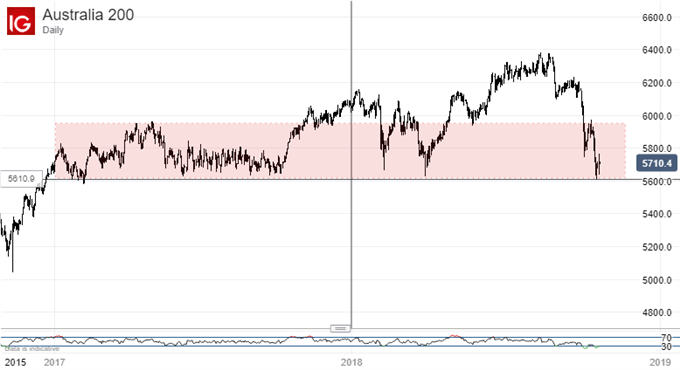 Below that is 5594.2, which is the fourth, 61.2% Fibonacci retracement of the rise from the lows of November 2016 to the peaks of August this year.

If both these levels endure into month end then it could be a sign of resilience at last, which may herald the resumption of range trading between 5610.9 and the old range top of 5960. Battered bulls will probably need to regroup somewhere in this region and build a solid base if they are to try 6000 again. This should probably take a bit of time, and any sharp upward moves are unlikely to be trustworthy as a result.

However, should these supports give way then the ASX could well be in for a deeper slide. Its first new downside target in that event would probably be 76.4% retracement at 5361.9, with the index’ hold on the 5,000 handle in some doubt if even that gives way.

Watch this month’s close very carefully then. If current supports hold then the bulls may have hope of salvaging something from a wretched October.