ASX traders seem to have abandoned all hope of revisiting August’s ten-year highs anytime soon, with the index instead sliding to lows not seen since June of this year.

The global fundamental backdrop has a lot to answer for here, with investor worries that many more US interest rate rises are still to come in this cycle weighing on Wall Street and rippling out into the world beyond . Trade-war fears remain very real and these will always hit the stock markets of a trading nation like Australia.

Technically speaking the Sydney stock benchmark looks to be in some trouble now. On its daily chart you can clearly see that its sharp, recent falls have taken it on a daily-closing basis below both the first and second Fibonacci retracement levels of its long rise up from the lows of March to those impressive, ten-year peaks. 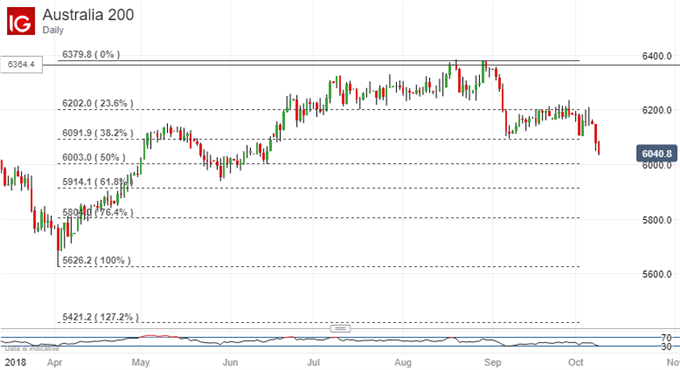 These come in at 6202.0 and 6091.9, respectively. Bulls would need to capture and consolidate that second retracement if they are to build a base from which to try a fight back but, so far, there seems little sign that they possess that kind of resolve.

Indeed the focus remains squarely to the downside, where the significant 50% retracement lurks ominously, at 6003. If that gives way the index would be in serious trouble from the bullish perspective with the path from those March lows in the 6600 region barred by very few obvious areas of likely lasting support.

Much may depend on whether the index can hold up above the psychologically crucial 6000 level, now only 40 points or so away to the downside. The ASX has managed to hold above that for five months, which is only about half the time it managed at such altitudes during the last serious foray up here, back in 2007/8. 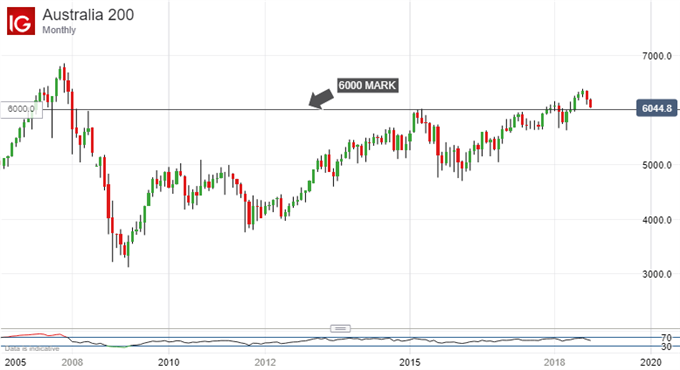 A daily or weekly close below that point might well be the clearest sign yet that the bulls are giving up on the index.