The ASX 200 currently presents investors with a rather busy technical chart, as you can see. 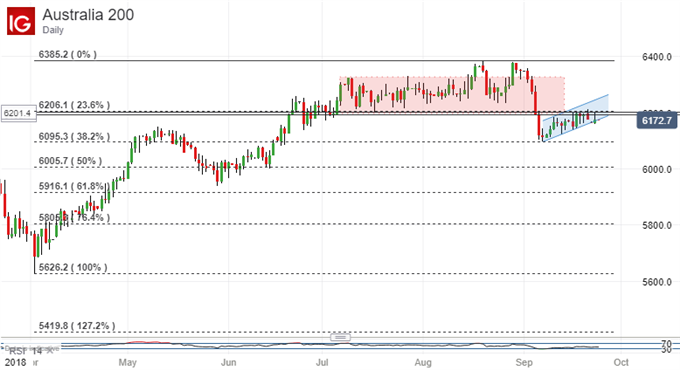 We’ll need to get in a bit closer to see what’s really going on, but keep the big picture above in mind as we do.

Essentially the Australian stock benchmark appears to be running out of steam before it has conclusively cracked a key resistance level. That comes in at 6206.1 and represents the first, 23.6% Fibonacci retracement of the climb up from the lows of late March to the peaks of mid-August.

ASX bulls need to reclaim that if they are going to go on to try and claw back the steep falls which took place in early September. 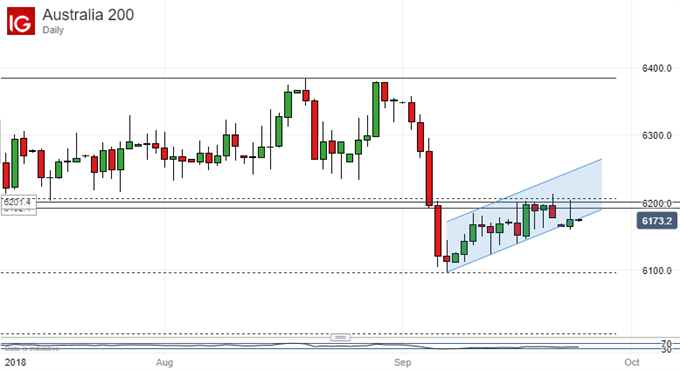 So far, they have failed to do so on a daily closing basis. Moreover, although they have made some intraday moves above that point in the past week, the little rally, which has been in place since September 6 seems to be running out of puff.

We can’t be certain of this yet, but if the bulls cannot retake and consolidate above that 6026.1 point over the course of this week, then it will look very likely that the rally has indeed faded out.

That would put focus on its foundation, which, not coincidentally is at 6095.3 the second Fibonacci retracement of the overall rise.

We have seen some quite narrow daily ranges in recent days, which suggests a degree of indecision on the part of the overall market. Given the daily drip feed of gloomy trade headlines between the US and China this is perhaps not surprising. Australia is caught between the two global titans as few other states are, with China the key export destination for its raw materials and US ties a bedrock of Australian national security.

However, it looks to me very much as though this index is slightly exhausted and, barring a strong near term bullish push, more downside looks very likely.