The ASX 200’s September bounce at key support has been the platform for a minor but notable fightback, which could well see further gains yet.

That bounce took place on September 7. The intraday low of that day was 6095.5, a point which probably not coincidentally is also the second, 38.2% Fibonacci retracement of the rise up from the lows of mid April to the double highs of August and September. 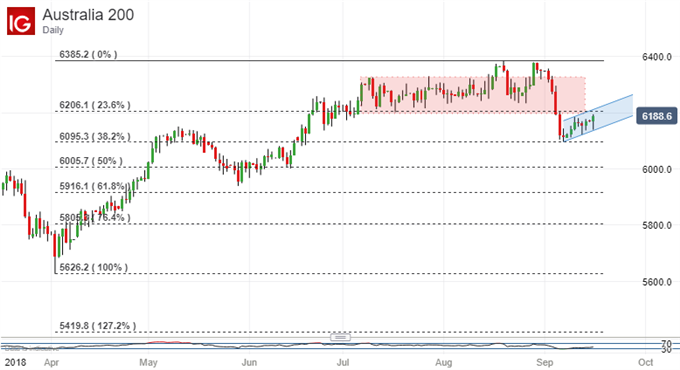 The daily candlestick for that session evinced the small difference between the open and the close, eclipsed by a much broader intraday range, which can be characteristic of a change in sentiment. So it proved with the trading sessions since forming a nascent but already quite well-respected uptrend channel. 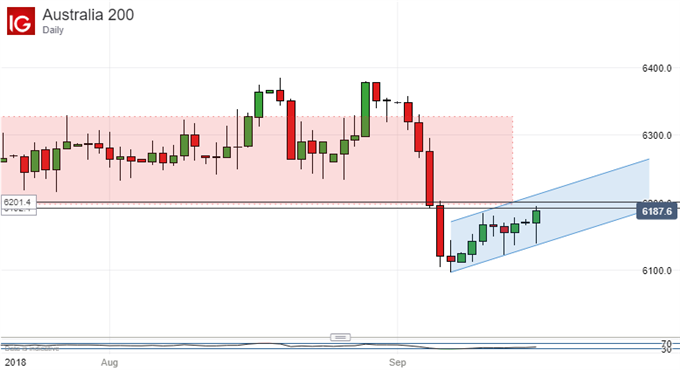 Still, the most obvious feature of the chart above remains those ominous four consecutive days of steep falls between September 3 and September 7. The bulls have made reasonable progress toward clawing back the final down down day of that series but, as can be seen from the chart above, they have yet to manage a daily close above that level. They’ll need to put that right soon if they are to build a reasonable base from which to make good the entire fall. However, while the uptrend channel endures they can be seen as still on the case, Moreover its lower bound is some way below the current market, coming in at 6134.1 or so.

The best plan for the moment might be to keep playing this uptrend channel for as long as it endures, targeting an eventual break higher. The index looks by no means overbought, with its relative strength index quite subdued, at 40 or thereabouts.