The ASX 200 is enduring a torrid time. Falls last week have taken the Australian equity benchmark down to levels not seen since mid June, leaving the old trading range some way above current levels.

The index has also seen eight straight sessions of falls, a rare losing streak which equals its worst since the Global Financial Crisis. Fundamentally, this weakness is underpinned by global worries about trade, of course. Fears around emerging markets with heavy US Dollar debt haven’t helped either, as the Federal Reserve continues to tighten monetary policy. Still, the index did manage to rise on Monday in response to Wall Street gains, suggesting that buyers are at least out there even at what are by historical standards very elevated levels for the ASX.

Technically what matters now is the survival on a daily-closing basis of the 6095 level. This is where the latest fall was halted, on Friday of last week. It’s also the second, 28.2% Fibonacci retracement of the index’s rise up from the lows of April to the peaks of August and September. 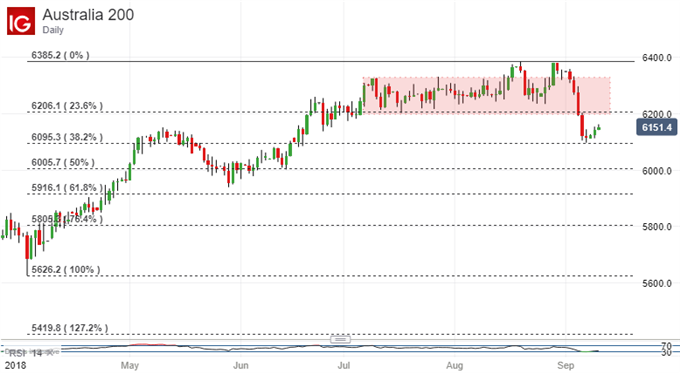 For as long as it holds, the bulls will probably try to inch back toward the first retracement level which comes in at 6206.1. However to get there they will need to take back some of the steep falls we saw last week and that looks like a tall order near term. While that level eludes them, a retest of 6095 will remain likely.

Still, the index now looks understandably oversold and its moving averages remain in chronological order above the market for the 20-, 50 and 100-day periods. There is scope to hope for a little consolidation, but there is no doubt at all that the ASX looks much less comfortable above the key 6000 level than it did.

The index has rewarded bravery above that point so far, but it could be time to consider some insurance below it, especially if that key support gives way.