The ASX 200 has failed to make much progress since my last technical look at it a week ago. Indeed the Sydney stock benchmark remains stuck within the broad range which has effectively bounded trade since early July, but for one very short-lived upward thrust which took it up to new, ten-year highs. 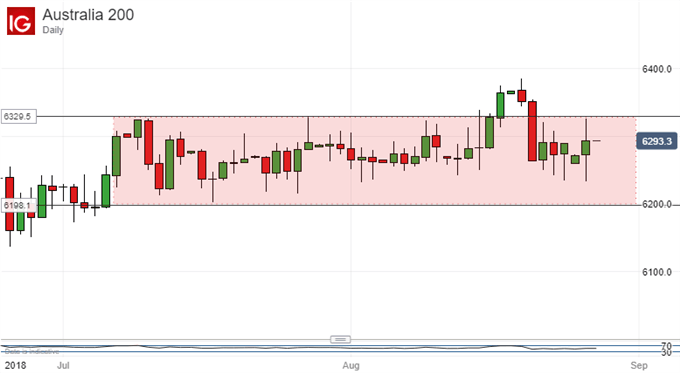 The bulls needn’t be too disappointed at the brevity of that foray though. The ASX clearly remains very comfortable close to those impressive peaks, with no significant impulse to cash out visible despite the chunky 750-point gain seen since April.

Momentum indicators and moving averages don’t suggest a pullback anytime soon. Moreover, current market pricing puts the Sydney stock benchmark well above even the first, 23.6% Fibonacci retracement of the rise up from April’s lows to those recent peaks. That doesn’t come in until 6206. 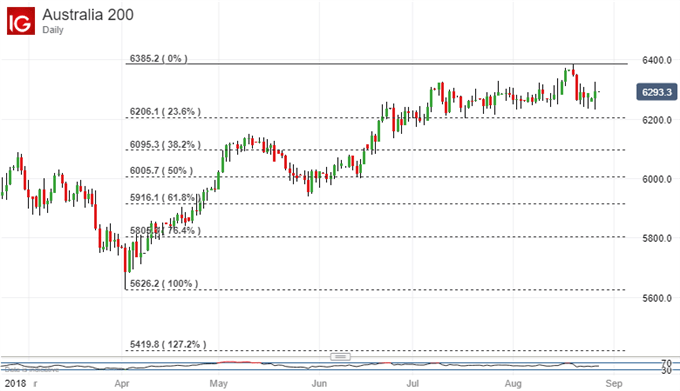 Indeed that point more or less forms the current range base, with 6329.5 looking like the upper bound. It has been the intraday peak on three occasions in the recent past.

Obviously the bulls will want to push on past that, recapture August 20’s 6385 peak and consolidate their gains there. Technically speaking however there seems little prospect of their doing so in the near future, even if by the same token the current, elevated trading range is not under immediate threat.

It may be unexciting but the best and safest bet for now might be to simply continue playing it in the absence of any daily closes outside.

After all, as we saw earlier this year, the ASX 200 can range trade for quite a while.