ASX 200 Technical Analysis: Bulls Can Hope For More Highs Yet

The start of a new trading week found the ASX 200 at ten-year peaks, and nosing above the 6.300 level.

Of course, as you can see from the monthly chart below this is not territory the index has conquered for very long at any point since 2005, so the big question must be how much longer can it stay up here? 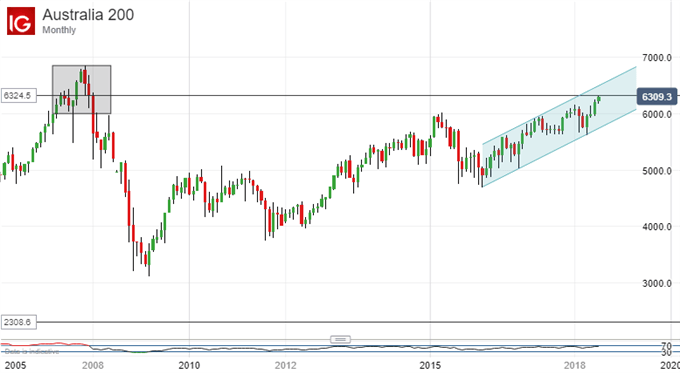 Well, technically speaking there seem to be few signs that a reversal is imminent. That monthly uptrend channel going back to February 2016 has been well respected, both to the upside and to the down, and the Sydney stock benchmark is currently biased toward the channel top.

The simple moving averages as 20-, 50- and 100 days are all in chronological order, albeit below the current price, as you’d probably expect after such a convincing run higher. The Relative Strength Index is edging up but does not suggest any overbuying.

So, all up, it doesn’t seem obvious that this bull run is going to hit the wall any time soon. However, a period of consolidation would at this point probably be only healthy, and lay down a marker that investors are happy to hold on at current levels even though some of them must be sitting on chunky profits.

A daily chart would probably be more useful to us in gauging where that consolidation might finds support. Sure enough the first, 23.6% Fiboonacci retracement of the rise up from April 3’s significant intraday low to the recent high of Monday comes in at 6159.5/.

A band of support between that and last week’s highs in the 6237 looks solid enough. 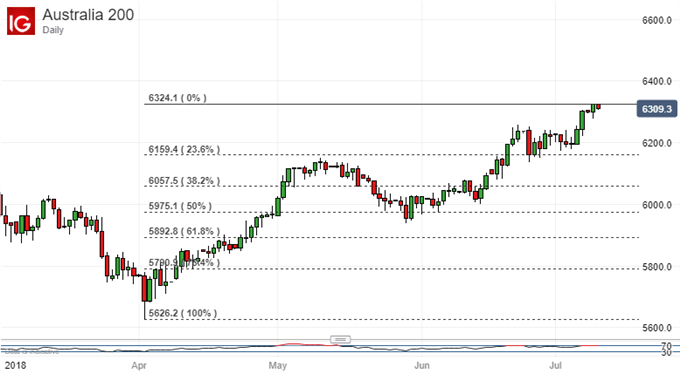 Definite upside targets are tricky to pick with conviction with the index at such unfamiliar altitudes, but the uptrend still looks very much worth playing for at least as long as that support zone remain intact.